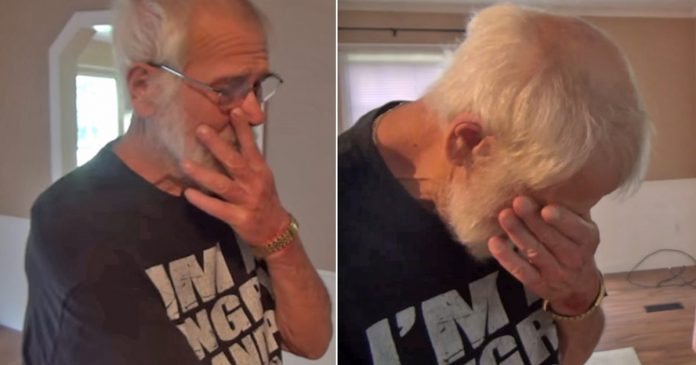 Everyone dreams of being able to give back to their parents one day, and this man gave his dad the sweetest gift of all.

Michael Green, who created The Angry Grandpa Show on YouTube, spent months asking for his dad’s help to look for a new home.

His dad, Charles, was always happy to help, as he thought he was hunting for a house for his son and his girlfriend Bridgette.

But what Charles didn’t know, was that it was actually for him.

“For the past few months, Bridgette and I have been planning a huge prank on Angry Grandpa and today’s the day we’re going to pull it off.

“We’ve been taking my dad house hunting with us under the pretenses that he’s looking for a house for me and Bridgette. The only problem is, he’s been looking for his own house,” Michael begins the footage.

Michael filmed the moment he showed his dad a lovely house he had found, and his dad was really excited for the pair, and loved everything he saw.

He points excitedly at features of the house he liked, such as the large rooms, shower and fireplace area.

Then his son caves and tells him the truth.

“We are searching for a house for you. This is yours,” Michael says, while pulling out the house key.

We weren’t prepared for what happened next. You’ll need tissues for this sweet moment.

His dad is so surprised and bursts into tears of joy, hugging his son tightly.

My son bought me a house. I have no words for how much I love him. I love you son. https://t.co/EInOsrtGjH

His son reassures him that he does and that “every kid wants to buy their father a house.”