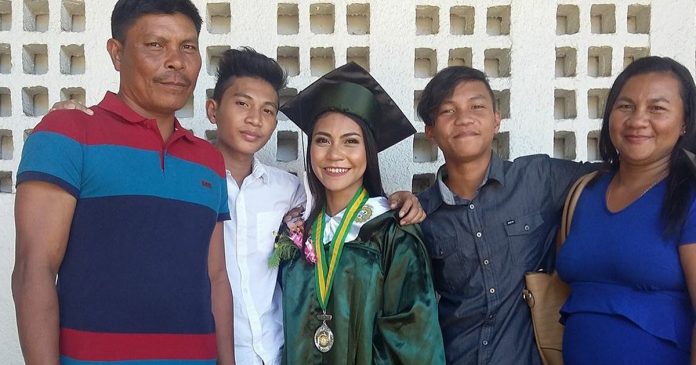 Regine Cañete Villamejor was a model student and knew that education would pave a path to a brighter future but she knew that she would not make it to graduation without her parents’ endless support and sacrifices.

In an interview with Definitely Filipino, the young lady pays tribute to her parents for helping her to get through college.

It was definitely not easy for her who is known as Rej to her family and friends to attend university and graduate. However, Rej knew that her parents had it harder.

According to her, her parents often quarreled over financial issues as the couple had to support not only Rej but also her younger brothers.

Rej’s father works as a fisherman while her mother supports their family by working as a fish vendor in their hometown in Cebu, the Philippines.

“Looking back, my father would shed tears while looking at us when we were sleeping. We couldn’t even move because our house was so tiny,” she said.

There were times when she felt like giving up but her mother’s words kept her strong. “Education is the only thing you can do to help us,” Rej recalled what her mother always said to her.

Even though her university is a few hours away from her home, Rej never failed to go back on weekends and helped her mother sell fish. “It was at an early age that I realized how life was,” she told Tempo.

“While selling fish, I always kept telling myself that I had to finish college to help my family and my siblings.”

Rej later managed to graduate with a Bachelor of Arts in Liberal Arts and Commerce, with a Major in Communication and Marketing, four years later. She later secured a job at Virginia Food Incorporated, a food manufacturer in Cebu.

“As I look back at my struggles, I realize that it made me stronger. And I want to thank my parents. Whatever achievements I have, it’s because of them.”

“I will save money to help my family and for my siblings’ education and, at the same time, I will save some money for myself because few years after, I would probably go back to school and pursue my master’s degree.”