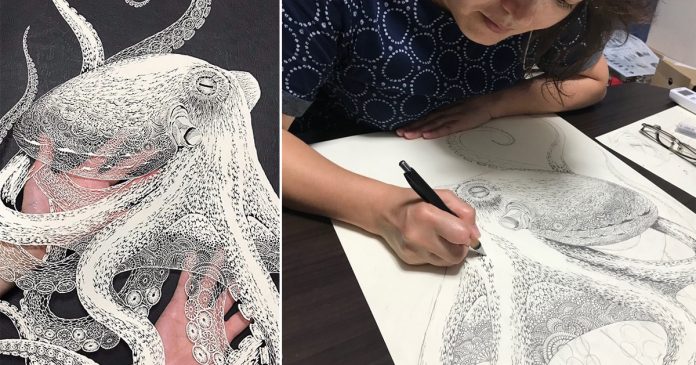 Since young, we’ve seen a lot of paper arts like origami, paper quilling, and paper cut-out. But this paper cut-out by Masayo Fukuda from Japan is unquestionably on a different level.

Her paper cut-out is extremely complex and highly intricate—might be to the point of torturous for some of us. With 25 years of experience in paper cutting, Fukuda’s hand-cut work of art will mesmerize you with its hypnotizing details.

Fukuda hand-cut each and every detail on a single paper and this octopus is one of her many elaborated works.

Looking at it up-close, her paper cut-out looks even more impressive and complicated.

The details are out of this world.

“For me, cutting pictures has become a way of dissipating all the stress of my daily life. If you want to get started, all the basics you need are tant paper, a cutter, matte, and a good light source,” told the Japanese artist to Bored Panda.

Looking at it like this, you might think this is a drawing instead of a paper cut-out.

The process started with Fukuda drawing her sea animal’s sketches on a single A2 white paper.

She later used a cutter to cut the paper and turned it into an amazing work of art you’ve never seen before.

Believed to exist since 700 AD, Fukuda is using a Japanese technique called Kirie or Kirigami to cut her paper art. With her remarkable talent and her outstanding skills, Fukuda has been producing many intricate paper arts like the octopus.

Fond of sea animals, most of Fukuda’s arts focused on the mysterious creatures under the sea.

Amazing details on this fish.

Is this a type of sea snail?

Besides sea creatures, she also cut papers into animals like the chameleon, iguana and birds.

One word to describe the details on this lizard—fascinating.

This looks simple, but imagine the effort that goes behind it.

How can she cut it all without any mistakes, seriously?

The most beautiful unmanned train station in the world called the...