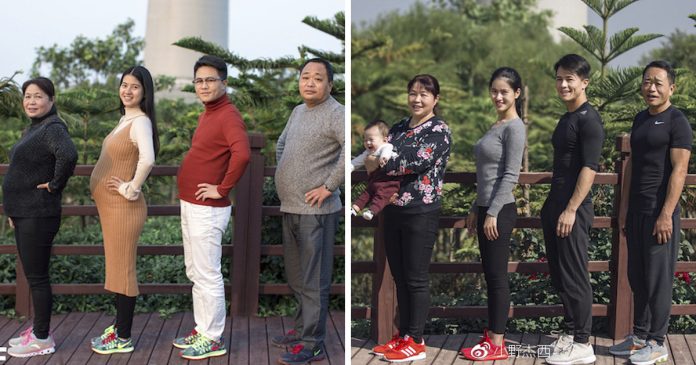 Every single year without fail, we never forget to set a few things or two as our New Year’s resolution. And everyone favorite’s would definitely be losing weight and get fit. This father-son duo amazing transformation might just be the motivation you need.

It takes a lot of perseverance to lose weight and achieve your dream body but having a companion to support and join you would definitely going to help. Take this son and his father for example.

The 32-year-old Ono Jessie is a photographer and he decided to start a weight loss journey with his father, Xiaoye Jessie. Both of them have round bellies but agreed that they won’t let the fat bellies stay there much longer. The journey might be challenging, but Ono and his father are determined to see a better version of themselves.

The father and son went to the gym almost every day but Xioaye’s knowledge of fitness was very limited. So Ono taught him everything he needs to know—from how to operate fitness equipment like treadmills to how to use a bench press.

He taught him how to use the equipment.

When they first started to exercise, it was quite hard for Xiaoye as he is quite old. But after encouragement and constant companionship from his son, Xioaye decided that he will never give up even when he’s tired.

It was hard for the father at first.

But he won’t give up.

Ono and his father went out to run regularly.

Ono and his father’s bodies when they first started.

There are not many changes to be seen in just ten days.

The fat tummies started to disappear.

A month later, their abdominal muscles started to peek in but still vaguely seen.

The fat bellies are gone but they won’t stop there.

Two months later, they really lost a lot of weight.

Four months later, Xiaoye’s going strong even when his son went on a business trip.

Five months later, their six-packs can clearly be seen.

Is it just me or they get more handsome?

Nobody would have guessed that they had fat bellies a few months ago.

What’s most important, Xioaye gained so much confidence and feeling so happy about his new body.

Besides Ono and his father, his mother and wife were in the weight loss journey too! They’ve been exercising together and taking their fitness very seriously.

Look at the differences!

This is going to be my #fitnessgoal this year!

Such an amazing transformation!

At the age of 30, former housemaid defies all odds and...