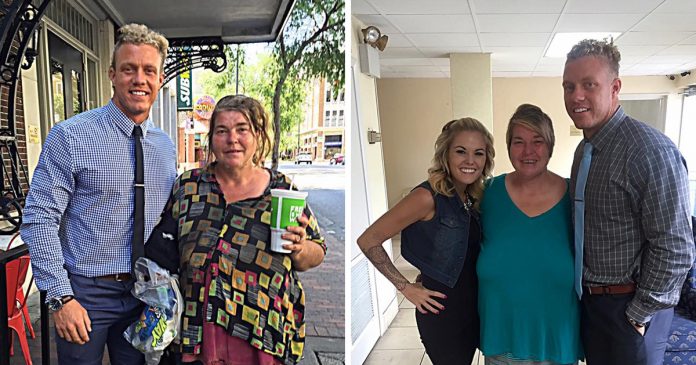 Walking in a suit to work every day, Greg Smith’s businessman look causes him to be approached several times by people asking for some money. But one particular homeless woman didn’t ask for money but instead just wish him a good day and it got him curious.

Smith is founder of Hybrid Athletes in Orlando, Florida—a company that promotes health and well-being through exercise. Having people approached him for money quite frequently, it caught his attention when he found a homeless woman who only smiled and said “Good morning, Sir. Have a great day. God bless (you)!”—words Smith never expected to hear.

Smith wears a suit to work.

That is when he started a conversation with that homeless woman whose named Amy Joe and their friendship began. They began to see each other on Tuesdays for around 30 minutes to an hour just to eat together and have a talk.

“Every Tuesday Amy Joe and I now have Lunch together. For 30 min to an hour, I get to hear how positive she is even though she really has nothing,” told Smith on his Facebook.

“Last week Amy Joe kind of dropped a bomb on me—she cannot read. Amy Joe does not smoke, drink, does not have a drug addiction, or anything to that nature. She simply just has never had anyone teach her how to read.”

Joe gave up food for books.

“She told me how hard it was for her to find work not being able to read. She began to tell me any money that she can collect she uses to check out library books that help with learning to read instead of buying food.”

What’s more amazing, Joe would rather learn than use the money she got for food. She would probably be thinking that she can buy food all she wants later when she finds a decent job.

Ever since that day, Smith has been spending his free time to teach Joe to read. He rented one library book a week so that they can read it together on Tuesday and so that she can practice on her own throughout the rest of the week.

Besides that, Smith didn’t only help Joe to learn reading but gave her a new look too!

Sometimes they went for groceries together.

Smith gave her some food, drinks and some other things she might need. All in all, Smith has been taking good care of Joe ever since.

Joe has been wishing Smith a good day, now it seems that the generous man is returning the favor by helping Joe to have a good day herself!