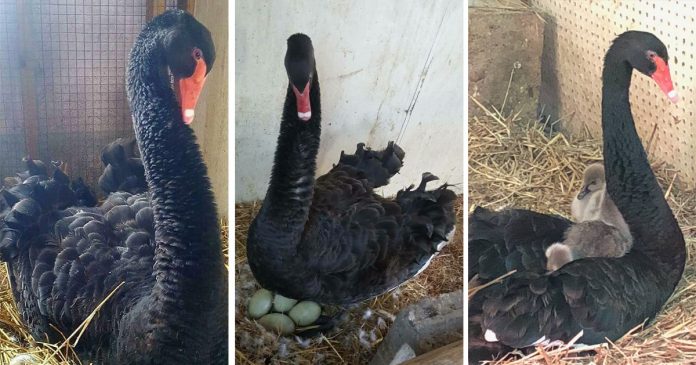 When it comes to swans, we imagined them as having the whitest feathers and always moved in groups. But certainly not this swan in Carolina Waterfowl Rescue.

This is Ginny, a very elegant black swan.

The original black swan habitat was believed to be from Australia. Ginny was taken to Carolina Waterfowl Rescue after she had been saved from animal abuse and mistreatment. The people there were hoping that Ginny could finally have a safe life and maybe get some new friends. But things don’t always work out the way we planned.

Ginny probably felt lonely after being isolated by others and started to make friends with humans instead.

“She started coming to the house, talk and spend time with her human friends,” said Jennifer Gordon, head of Carolina Waterfowl Rescue.

The volunteers in the sanctuary were very sad when they learned about the difficult situation Ginny was experiencing. Then something amazing happened.

Ginny started to make a nest and laid six eggs!

The sanctuary staff also realized that all the eggs had been fertilized after checking them but nobody was sure of who the father is.

Meanwhile, the sanctuary doesn’t work with raising animals but they made an exception for Ginny—hoping that her new family will give her a little hope and make her happy again.

The sanctuary also started posting about Ginny and her eggs on Facebook and live broadcasted the moment her baby cygnets were born.

After the six cute cygnets were born, the sanctuary staff believed that the father would be another black swan called Diablo. They are not sure how everything actually happened, but love is always a mysterious thing.

The cygnets are out!

Ginny now has her own little friends!

These cygnets are too cute!

We hope the birth of the cygnets will give Ginny her much needed strength and happiness!