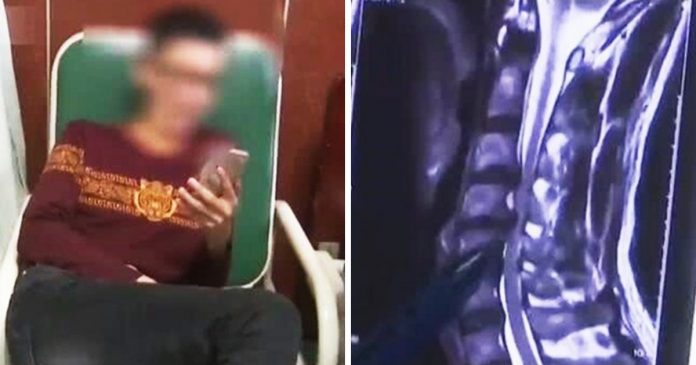 Most of us probably thought that there is nothing harmless about lying on the couch playing with our phones, but who knows that it can actually damage our spine and may make us paralyzed!

A 39-year-old man surnamed Li has a habit of sitting in a really bad posture on his sofa while playing on his phone. He’s glued to his phone for hours and only stop when it’s time for bed.

Li loves lying on his sofa and play with his phone.

One day, this man from Jiangsu, China was shocked to find out that he had difficulty in breathing as soon as he woke up in the morning. Li quickly rushed to the hospital to seek medical treatment. Not surprisingly, the doctor informed him that this was caused by his prolonged bad posture while playing with his phone.

As Li has always been sitting with bad posture for most of the days, it stressing his spinal cord and damaged it. He also suffered from a herniated disc in his spine and the spinal nerves were heavily compressed due to his bad posture.

Even worst, the doctor mentioned that Li might have been paralyzed if he didn’t discover this problem on time.

Upon this incident, the doctor shared a few important notes. The doctor recommended putting the phone up at eye level so that we don’t have to bend our head so low. He said that if people dipped their head lower than 60 degrees while playing with their phones, the pressure between cervical vertebrae would be equivalent to putting 27 kg on their necks and spines.

He also suggested to always use night mode or turn down the brightness level at night so that the eyes would not be too fatigued.

Better be mindful of our posture next time!