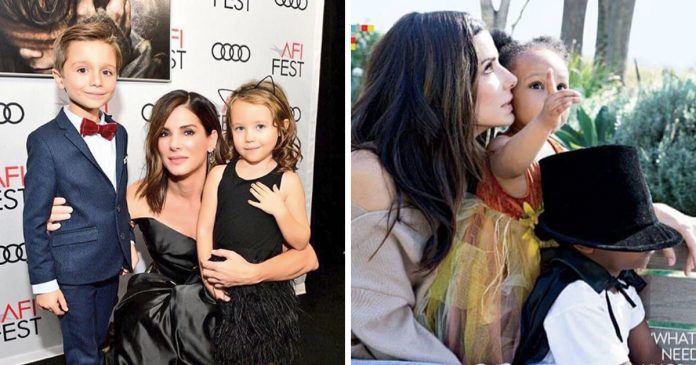 Sandra Bullock’s new Netflix thriller, Bird Box has terrified tens of thousands of viewers around the globe since it aired on December 21, and it turns she may have portrayed her own fears in the film.

Anybody who’s anybody has seen the chilling post-apocalyptic movie.

The thriller follows a woman, played by Sandra, and two children as they embark blindfolded on a dangerous journey to escape from an evil, mysterious force which makes you want to take your life if you see it.

Like the main character of the film Malorie, Sandra shares a similar trait—wanting to protect her kids from the evil of the outside world.

Sandra is a mom of two—she has a 6-year-old daughter named Laila, and an 8-year-old son named Louis.

She adopted Louis from Louisiana when he was three-months-old in 2010 after she split with her former husband Jesse James. She fostered Laila five years later.

“You get so good at saying no and you’re so panicked about everything,” the Oscar-winning American actress told People magazine.

But she admitted that even though she always tries to keep her kids safe, she needs to say no sometimes.

“You literally have to stop and say, ‘Why did I just say no? Why don’t we just play hooky from school one day and just go enjoy life?’”

“I’m constantly having to override my fear,” she added.

She revealed last year that she is extremely overprotective of her poor daughter Laila, who suffers from post-traumatic-stress-disorder from people trying to photograph her.

“We had an allergy scare that sent us to the ER, and we were followed by the paparazzi, so the word was out that I had another child,”

”And everyone wanted photos. It was heartbreaking,” she told InStyle magazine.

Watch the trailer for Bird Box below:

Remember little Lucy from ‘The Chronicles of Narnia’? Here is how...