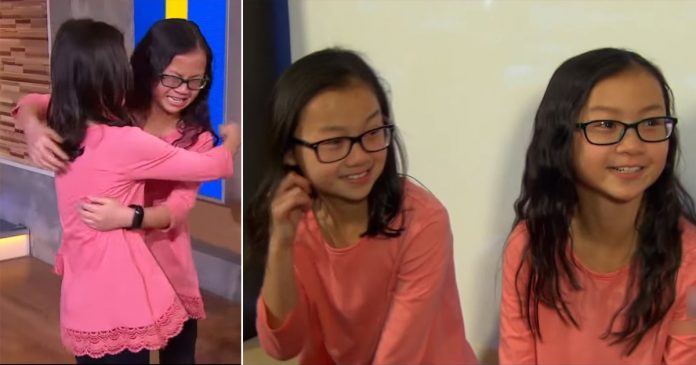 Chinese identical twins Audrey Doering, from Wisconsin, and Gracie Rainsberry, from Washington, who were separated at birth, brought the internet to tears when they were reunited for the very first time on live TV.

The emotional moment was filmed on Good Morning America, where the ten-year-old twins embraced after being separated for almost a decade.

The pair were both adopted by different families in the U.S. from China, and didn’t know the other existed.

But Audrey said she always felt that there was “somebody missing” from her life.

“Now it’s complete. I thought my parents, were, like, playing a joke on me,” she said, wiping back tears.

Audrey’s mom, Jennifer Doering, first realized there was a huge part of her adopted daughter’s life missing after finding a baby photo of the twins online.

With the help of a researcher from China, Jennifer soon connected with Gracie’s mom, Nicole Rainsberry on Facebook.

Jennifer said it was “the craziest thing in the whole wide world to look at your child exactly.”

“I mean, everything was the same. The same hair, the same glasses, the same outfits. As soon as I had that picture, I was desperate to find out … who that other child was.”

“I mean this stuff you read about. And how could it really be that there are two of them? It’s hard to process that information. It was crazy to be looking at what looked like Gracie, but knowing that it wasn’t Gracie,” Jennifer added.

“It’s very overwhelming,” Gracie said after she was finally reintroduced to her twin sister, and the pair said their hearts were full of “love”.

And since Gracie and Audrey reconnected, they discovered they both like similar things—pasta, pizza, French fries, and math!

Never settle down and expect a fairytale life with a guy...