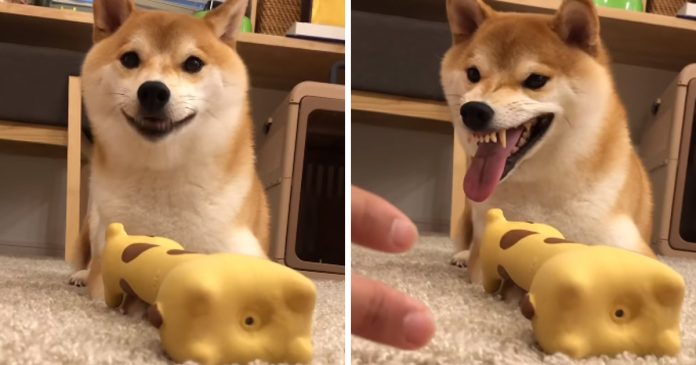 It’s always bones when it comes to dogs. But this Shiba Inu called Kotetsu from Japan prefers toys—particularly his favorite giraffe toy.

You can see how much love the dog has for his toy giraffe when he shows such a scary face when his owner pretending to take the toy away. Kotetsu doesn’t bite or do anything aggressive but just can’t help giving his owner ‘the face’ when he tries to steal his toy.

In the 1 minute video recorded by a Japanese couple, the man ‘Papa’ was extending his hand to reach the toy. Looking at that, Kotetsu quickly shows off his sharp canine teeth and sticks out his tongue, giving a fierce look right away!

“Wow, such a bad face! Scary! It’s scary!” exclaimed Papa while having fun teasing his dog.

But just like how fast the famous ancient Chinese mask-changing dancer changes their face masks, Kotetsu’s ability to change his expression is remarkable and super cute! As soon as the woman ‘Mama’ called him and asked him to make a cute face, his face changes immediately and he turns into a cute smiling dog.

He flashed his sweetest smile.

“Kotetsu, make a cute face. That is such a cute face!” said Mama when the dog changes his expression.

But his face changes to scary face again when Papa tried to take the toy again. When this happened, the couple was laughing at this funny scene and Mama jokingly said that Kotetsu probably hates Papa from his reaction.

You can see how quick his face changes in this video!

This is another video that Kotetsu won’t let anybody close to his giraffe toy—even when they’re just another toys!

“Don’t put anything on my giraffe. Are you okay there, buddy?”