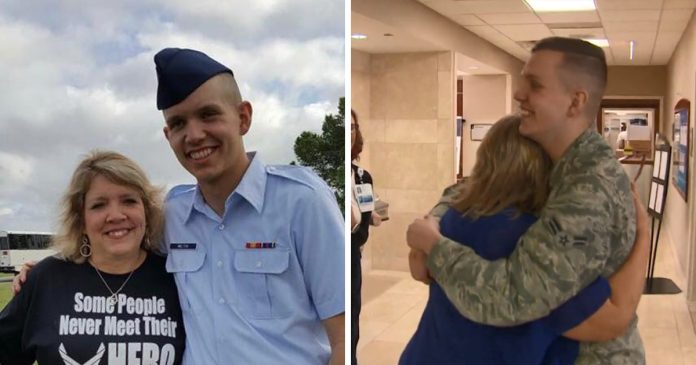 To be able to get together with our family is the best gift of all Christmas. Thinking that this time will be her first time celebrating the special day without her son Matthew in his 19 years of life, it was hard for Melton-Strader.

Melton-Strader’s son Matthew joined the Air Force after graduating from high school. She lost her father when he had a stroke in 2015. Her husband, Terry Melton passed away at the age of 51 from cancer the next year. Her home in Texas was destroyed by a tornado in 2017. Melton-Strader’s life has been very hard all along, and Christmas without his only son will make it even harder.

Melton-Strader found a new home and remarried after the tornado, but she feels that having a child leaving home is still “a big change”.

With Matthew stationed in Montana, literally 1,500 miles from home, it will be too much to ask him to come back because it’s too far.

Luckily, Matthew knew his mom just a little too well. So he planned to surprise his beloved mom. Little did she know, her son showed up during a ‘staff meeting’ at work.

Matthew’s surprise was a success because his mother didn’t expect a thing!

“Are you really here?!” asked Melton-Strader in disbelief.

Melton-Strader can’t be more grateful than she already is and decided to share the happiness on her Facebook. She took a photo of her son sleeping under the blanket and post it on Friday.

“That lump under the covers makes me so happy.”

The best Christmas ever!