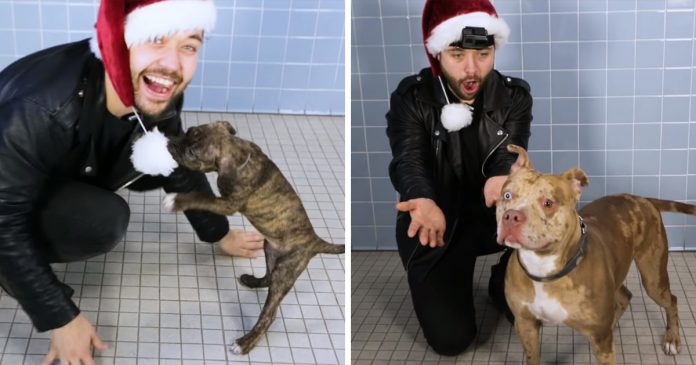 We all love a good magic show—it sparks our curiosity, awe and takes us to a whole new world full of excitement and mystery!

But how about dogs? Well, it turns out they have just as much fun as we do!

One magician decided to bring the magic of Christmas to a bunch of adorable pooches from New York’s Town of Hempstead Animal Shelter with a special surprise visit.

Magician John Stessel filmed himself giving the dogs the time of their life with their very own magic show, and their reactions are hilarious!

John shocked the pups by making their delicious treats disappear right in front of their eyes, and their responses are all very different, but equally adorable.

One excited pup even started to dance after the magic trick!

There is a heartwarming reason for John’s performance, though. He just wants to find the dogs a loving forever home by showcasing their unique personalities!

“We wanted to create a special moment for animal shelter dogs to bring them the magic of the holidays, to show off their adorable personalities and hopefully help them find homes,” John said.

And it was just as much fun for the magician as it was for the dogs! All John wants to do is create magical, uplifting content to “spread as much joy” to the world “as humanly possible,” he told Bored Panda.

“My mission has always been to spread positivity in both real life and online” he said.

John’s favorite moment? “When Luna pulled off my hat, or when Teragon and I started dancing with him on his back!” he added.

And don’t worry, John said all the excited canines were given all the treats they could dream of after filming was done!

We hope these furry friends find their forever home soon!

Catch the whole show in the video below:

Biologist successfully repopulates a rare species of butterfly from his San...