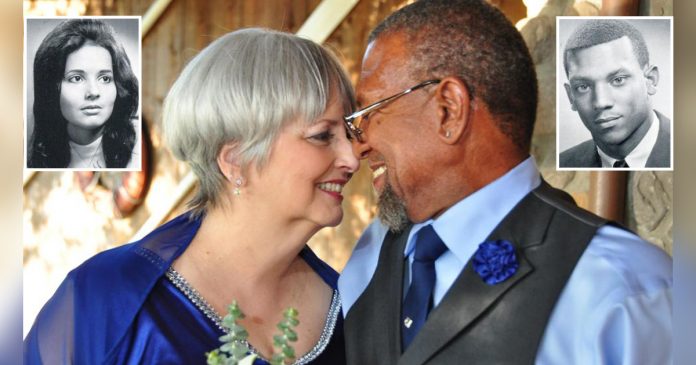 When racism was still rampant in the 60s, love between this couple still bloomed but social pressure took its toll on Howard Foster and Myra Clark—they eventually split up. Things have changed when they met 43 years later and they made a big decision to spend the rest of their lives together since then.

Howard Foster from Columbus, Ohio was in love with his high school sweetheart, Myra Clark. Howard and Myra were classmates at Columbus West High School and began dating in the late 1960s. They enjoy their late-night phone calls till dawn and were so much in love with each other. But love is not that simple during those times.

Howard is black and Myra is white.

Howard thought that he can handle the pressure of prejudice in the name of love, but he was wrong.

The discrimination he had to face goes extra length. After graduating high school, Howard enrolled in Columbus Technology Institute and was discriminated by his teachers simply because of his skin color. No matter how well he did his task, the teachers would always give him a ‘D’.

This made him think of his relationship with Myra. He didn’t want Myra to face the same prejudice just because she’s with him.

“Society would not allow us to be together and she would not be happy. She would get tired of the looks. I just thought it was unfair to her. Her happiness is the most important thing.”

So he made the painful decision to break up with Myra. The two said goodbye and turned to look at each other just one last time. At that moment, Myra had a hunch that they would meet again.

More than four decades later, Howard saw Myra again at Sharon Woods Park and he knew he wasn’t going to make the mistake of letting her go again. Thanks to their joyful reunion in 2013, Howard and Myra finally getting back together after years.

Interracial marriage was made legal in Virginia in 1967. As society had become more open to interracial marriage, the couple tied the knot in 2015. They are now holding hands every night before sleep, perhaps to make up for the lost time.

We’re glad that this couple is finally together and wish that no couple would be separated in the name of skin color ever again.

As Nobel Prize-winning writer Elie Wiesel wrote: “No human race is superior; no religious faith is inferior. All collective judgments are wrong. Only racists make them.”

Listen to their story here:

Fifty years ago, Howard Foster walked away from his love for Myra Clark because he didn't think society would let them be happy. Now, they're getting ready to celebrate their second anniversary and second chance together. http://bit.ly/2hdCdyC