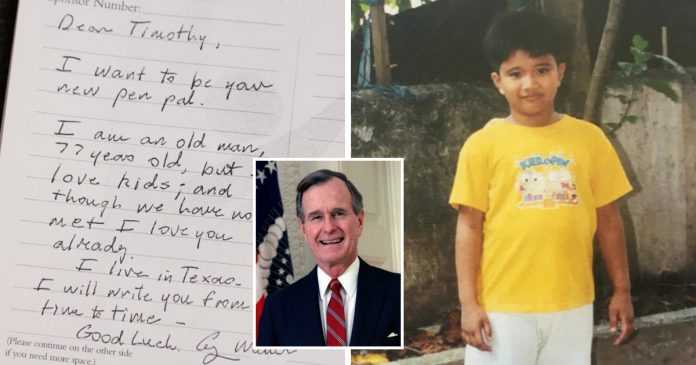 The late former President of the United States, George H. W. Bush, had a well-kept secret hidden from the public until recently.

According to CNN, the 41st President had been secretly sponsoring a 7-year-old boy’s education from the Philippines for the last 10 years. Their relationship began after he attended a Christmas concert in Washington.

During the concert, the audiences were asked if they would like to sponsor a child.

George quickly raised up his hand and asked for a pamphlet to find out more about the programme.

The sponsorship programme was organized by Compassion International, a nonprofit organization which helps underprivileged children in poor communities around the world through the support from local churches.

His security team was concerned about the authenticity of the programme but the former President insisted to get involved. That was how he and a young boy called Timothy, got in touch and became pen pals using the name George Walker as an alias.

In January 2002, George wrote his first letter to the boy.

I want to be your new pen pal.

I am an old man, 77 years old, but I love kids; and though we have not met I love you already.

I live in Texas – I will write to you from time to time – Good Luck. G. Walker”

Keeping the sponsorship confidential was quite a challenge and that was why Wess Stafford, the former president of Compassion International was given the task to screen the letters.
In one letter, George wrote about his dog, Sadie.

“Here is a picture of our dog,” he wrote. “Her name is Sadie. She has met a lot of famous people.”

“She is a very good dog she was born in England. She catches mice and chipmunks, and she runs like the wind. G. Walker.”

In another letter, he also shared about his Christmas in the White House .
“Dear Timothy,

I love that picture of you holding that ‘World Time’ gadget. I also have learned that you play the guitar – terrific!

Timothy, have you ever heard of the White House? That’s where the president of the USA lives.

Sending gifts was not allowed in the programme but after learning that Timothy loved art, George began to send him gifts with the help of his staffs who often made trips to the Philippines.

“Timothy would send him hand drawings and told the President how much he liked art, so he sent over color pencils, sketch pads, and paint,” Stafford said.

A drawing presented by Timothy to his pen-pal.

Timothy never found out about the real identity of his high-profile pen pal until he graduated from the programme. The boy who is now a teenager was surprised to find out who his sponsor was.

Currently, Compassion International works through partnerships in 25 countries with 7,000 local churches. Their vision is to create financial support to poor communities around the world and expectant mothers in need through funding early education.

Touching gestures to help their special needs classmate show that these...