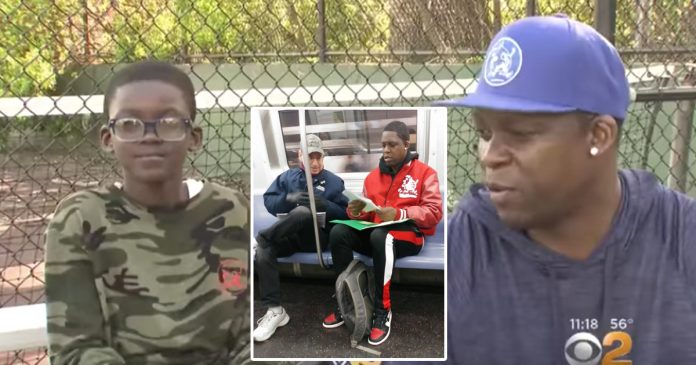 A dad who was trying to learn fractions to help his son with his school work was delighted when a Good Samaritan sitting next to him on the subway offered help.

Fellow New York commuter Denise Wilson captured the beautiful moment and posted the photo on Facebook, where it has been shared 70,000 times.

Clothing designer and single dad Corey Simmons, 42, was attempting to understand the math work so he could help his son in third grade, who was struggling academically in school.

He wanted to be the best father he could!

He told the passengers around him about his dilemma, hoping someone would be able to help him.

That’s when the man next to him told him he used to be a math teacher and wanted to help.

Denise couldn’t help but be moved by the heartwarming exchange and snapped a photo for social media.

″[Simmons] asked the guy to quiz him and everything he got wrong or was confused about he broke it down and corrected him,” Denise explained on Facebook.

“By the end of my train ride, the guy in the red [Simmons] had a better understanding [of fractions] and can bring home a new method and teach his child,” she wrote.

It’s great that Corey recognizes the importance of education, and isn’t afraid to ask for help!

“You need help sometimes and you shouldn’t want to bite your tongue, to not ask for the help,” he said. “So don’t feel shy to ask someone for help, it’s OK,” Corey told CBS News.

His bold move paid off because when his son took a math test shortly after, he passed with flying colors! Here is our proud daddy!

“My son passed his fractions test this morning. He got 100 out of 100. All 23 questions right,” Corey told Global News.

What a great and committed dad.