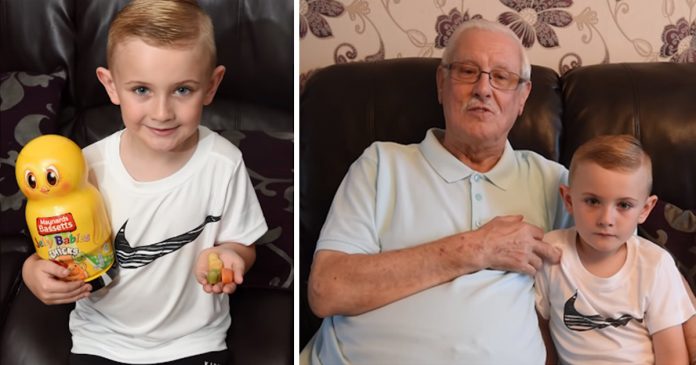 The diabetic Brian Clark was left alone with his grandson at home in Walsall, West Midlands when he suddenly suffered a hypoglycemic attack. He couldn’t move or speak a word. Seeing this, his grandson, Aiden Smith, quickly came to his rescue doing exactly what his grandfather would do.

Clark and his grandson, Aiden Smith.

Aiden Smith is just 6-year-old, but luckily he knows how to use the finger-prick blood-sugar-testing kit out of his smart observation. When Clark was having the hypoglycemic attack, Smith took the testing kit and tested his granddad’s sugar level.

Smith using the finger-prick blood-sugar-testing kit on his granddad.

It was at a dangerous 1.0 but Smith didn’t panic. He started feeding Clark with sweets, and thankfully the elderly man’s sugar levels had risen to 3.6. What a relief!

“Aiden had watched me measuring my blood sugar every day so he knew how to use it. Then he ran and got the Jelly Babies and quickly put a couple in my mouth. He was very calm, it took me about ten minutes to come around,” Clark told Caters News.

Such a smart boy! The family members were indeed very surprised and shocked to hear about the amazing heroic act and rescue mission that Smith has made possible.

“I am very proud, he really saved my life,” said Clark.

“I was really shocked. I couldn’t have done much even if I’d known what wasn’t happening as I was out of the house,” told Clark’s wife, Sandra.

Smith’s mother, Hayley Farren mentioned that everyone in the house actually knew how to use the testing kit as they have watched Clark measuring his blood sugar for years, but this is really the first time someone else actually does it.

“I don’t think Aiden even realized how important it was what he did. He saved his granddad’s life, he would definitely be in a coma if it wasn’t for Aiden,” said Farren.

“When I asked him about it he just said, ‘mummy I just knew what I needed to do’. He’s such a sweet, loving little boy, he always thinks about others more than himself. I believe it’s very important for kids to know a few basic things about how to react in emergencies. It can save a life,” Farren added.