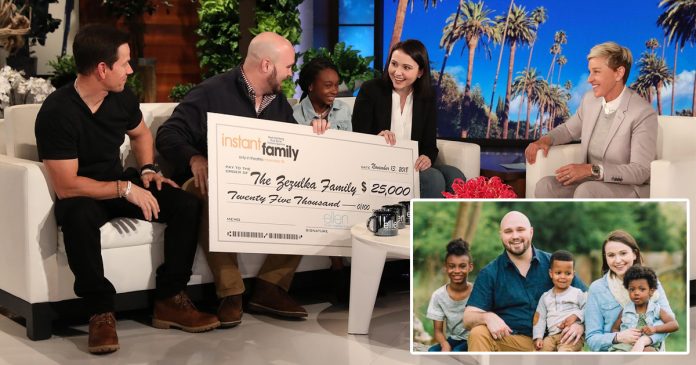 Mark Wahlberg is an amazing actor, known for taking on tough-guy roles on the big screen. Despite his impressive career and strong built, he actually has the biggest heart! His latest film ‘Instant Family’ carries a wonderful message about family and adoption, and was received well by critics and fans alike for its humor and warmth. Inspired by the director’s personal experience, Mark found another family with a similar storyline to the film and wanted to meet them.

Daniel and Paige Zezulka became famous after a video of them surprising their now-daughter, Ivey by telling her that she was going to be adopted, went viral.

The video brought viewers to tears when Ivey exclaimed, “I’m going to be adopted?” and bursting into tears when her parents nodded. All three hugged each other while they cried and it was a truly touching moment.

Ivey has spent the last three years in foster care, and the incredible surprise was perfectly done on her birthday.

Not only that, this amazing couple also adopted Ivey’s biological younger siblings, another uncanny similarity to the film that Mark Wahlberg starred in. Hence, they became an instant family of five!

What a beautiful, happy family!

Ellen Degeneres invited the new parents and Ivey to her talk show, along with Mark Wahlberg. There, Wahlberg himself surprised the family with a check for $25,000 and a brand new Chevrolet car. Wahlberg wanted the family to have a secure start in their new life together, and it was a beautiful moment.

Wahlberg presented a $25,000 check to the family as a kick-start.

The Zezulka family with Mark Wahlberg on the set of The Ellen Show.

It is with great hope that this family’s amazing story will inspire others to adopt children in need of a home and family. Ellen described it best when she said, “Look at the joy that you get to experience every single day on her face.”

Meet the dashing Prince Carl Philip of Sweden who has a...