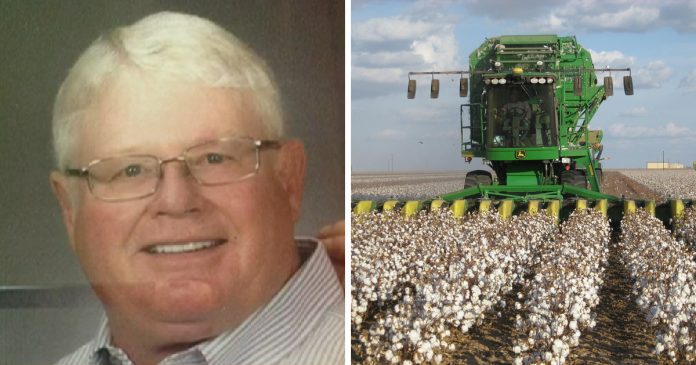 When a humble Texan farmer found out he had leukaemia, a kindhearted bunch of his friends came together to help him harvest his crop—he was so stunned when he found out!

Cotton farmer Greg Bishop was devastated when he learned the news in September.

As his condition weakened as he underwent endless rounds of cancer treatments and chemotherapy, Greg realized that he wouldn’t be able to harvest the 450 acres of cotton.

So these farmers with huge hearts decided to get together and lend a helping hand!

Their appeal to the community worked—between 80 and 90 turned up to aid in harvesting the huge amount of cotton.

To their shock, they even had to turn some people away because there were so many volunteering to help out!

Greg’s neighbour and friend Robert Nixon said they were happy to help out as they knew he would do the same for them.

“Greg is just a very humble guy that is fun to be around, likes to laugh and have fun. He’s just a really well-respected member of our community. He’d do it for us, so that’s why we did it for him,” Robert said.

The group of helpers completed the task, which would have taken two to three weeks, in just five hours!

“We started around 10 o’clock this morning and a little before 3 we were done. I mean we had that many people,” Robert said.

“He’s got a rough row to hoe and he’s got a lot more worries down the road than just getting his crop in so we were all just real glad to do it. And I was glad to be a part of it,” Greg’s friend Dave Carthel said.

Greg is blessed to have such kind and generous friends. We wish Greg a speedy recovery!

A set of identical twins found their soulmates who turned out...