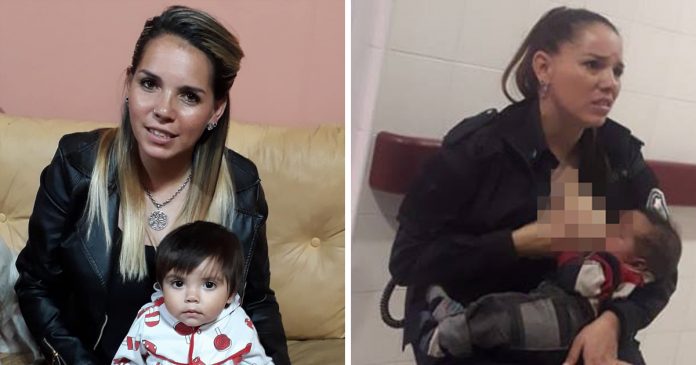 An Argentinian police officer displayed an incredible act of kindness when she breastfed a baby in a hospital which had been described as “smelly and dirty” by staff.

Celeste Ayala, a mother-of-three, was working at the Sor Maria Ludovica children’s hospital in Buenos Aires when she heard the hungry and distressed newborn crying.

Celeste’s maternal instincts immediately kicked in so she ignored the remarks made by the hospital staff and asked doctors if she could hold and breastfeed him.

“I noticed that he was hungry, as he was putting his hand into his mouth, so I asked to hug him and breastfeed him,” she told local media.

“It was a sad moment, it broke my soul seeing him like this, society should be sensitive to the issues affecting children, it cannot keep happening,” she added.

Celeste’s friend and colleague, Marcos Heredia said that she wasn’t bothered by the hospital staff’s comments.

“I want to make public this great gesture of love you made today for this little baby who you did not know, but for who you did not hesitate to act like a mother,” Heredia wrote in a Facebook post.

“You did not care if he was dirty, which is what the hospital staff called him. Good job mate.”

All Celeste had her mind on in that moment was making the poor malnourished baby happy again!

She couldn’t bear to see the helpless newborn cry uncontrollably. Being a mother herself, she had to step in.

Her honorable actions even saw her promotion from officer to sergeant a week later!

She really deserves the promotion for her heroic gesture!