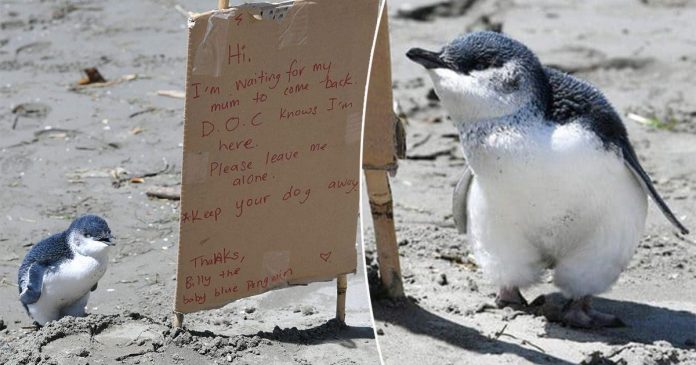 Although blue penguins are native to the area, they are never usually spotted wandering around during the day—night time is when usually they come out to play!

Did you know that the adorable penguins are the smallest of their kind in the world?

After word got around about Christchurch’s special guest, huge crowds of people flocked to catch a glimpse of the baby penguin.

And soon they even gave him a name—Billy!

But the cute baby bird soon became very anxious after some residents let their dogs chase him.

He just wanted to be reunited with his mom and waited patiently every day.

When some residents saw how upset Billy was by the attention, they got together and made him a sign with a piece of cardboard.

“Hi. I’m waiting for my mum to come back. D.O.C. knows I’m here. Please keep your dogs away. Thanks, Billy the baby blue penguin,” the sign read.

To everyone’s surprise, Billy stood right next to the sign for the rest of that day—it’s as if he was psychic!

Soon, the Department of Conservation paid Billy a visit and realized that because of his age, his mom was probably not going to return. Our hearts!

“It’s unusual for a blue penguin to be out in the open on the beach during the day. Normally they are at sea or in burrows during the day,” senior ranger Anita Spencer said.

Anita also discovered that Billy was underweight at only 550 grams—he should have been 900 grams at least!

So he quickly brought Billy back to their rehabilitation center, where he will be nursed back to good health for about three weeks before being allowed back out into the real world.

Billy soon made a miraculous recovery and managed to eat solid foods such as salmon and anchovies, which he gobbled up really fast!