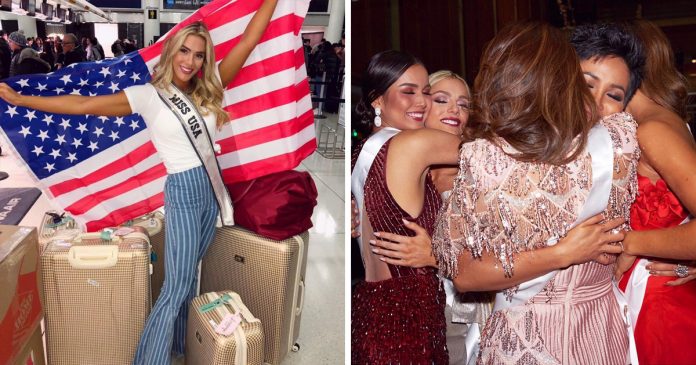 The beauty of having people from different cultures coming together is to learn from each other. For Miss USA, Sarah Rose Summers, she learned it the hard way when a video clip of her giving opinion about Miss Vietnam, H’Hen Nie, and Miss Cambodia, Rern Sinat went viral.

The conversation took place when Summers asked another two contestants from Australia and Colombia what they think about H’Hen and Sinat. She received widespread backslash for the video and later apologized for being disrespectful.

“What do you think about Miss Vietnam?” she says to Miss Colombia Valeria Morales and Miss Australia Francesca Hun in the video.

The two ladies answered with single adjectives, such as “cute”, “elegant” and “fashion”,  while Summers responded with a mouthful of words.

“She’s so cute and she pretends to know so much English and then you ask her a question after having a whole conversation with her and she goes [nods and smiles],” Summers says in the video before laughing. “She’s adorable.”

Later in the video, she showed empathy for Miss Cambodia, Rern Sinat.

“Miss Cambodia is here and doesn’t speak any English and not a single other person speaks her language. Can you imagine?” she said of Sinat. “Francesca said that would be so isolating and I said yes and just confusing all the time.”

Summers, a Nebraska native, was criticized harshly on social media for her comments.

“The future Miss Universe should not be an ambassador of bullying,” said one person, TMZ reported. Another person said it’s a “shameful display of meanness poorly masked as empathy.”

“Shame on you ladies! Beautiful outside but not inside!!” wrote another person. “I’m an American and I disagree with what Miss USA did. She’s a mean girl with a bully attitude!”

Luckily for her, there are people who stood up for the pageant queen and model, including her mom.

“She doesn’t have a mean bone in her body,” she said of her daughter, before adding: “[Summers] was just recreating how Miss Vietnam acts when she doesn’t understand what someone is saying. She wasn’t trying to mock her.”

Summers has updated her Instagram account 11 hours later and apologized that her actions have not been respectful to both of the ladies, together with a photo of her hugging Sinat and Morales and Hun hugging H’Hen.

“@MissUniverse is an opportunity for women from around the world to learn about each other’s cultures, life experiences, and views. We all come from different backgrounds and can grow alongside one another. In a moment where I intended to admire the courage of a few of my sisters, I said something that I now realize can be perceived as not respectful, and I apologize. My life, friendships, and career revolve around me being a compassionate and empathetic woman. I would never intend to hurt another. I am grateful for opportunities to speak with Nat, Miss Cambodia, and H’Hen, Miss Vietnam, directly about this experience. These are the moments that matter most to me.”

This is a good example to be sensitive and care for other’s feelings and respect each other’s differences. Please share if you agree!