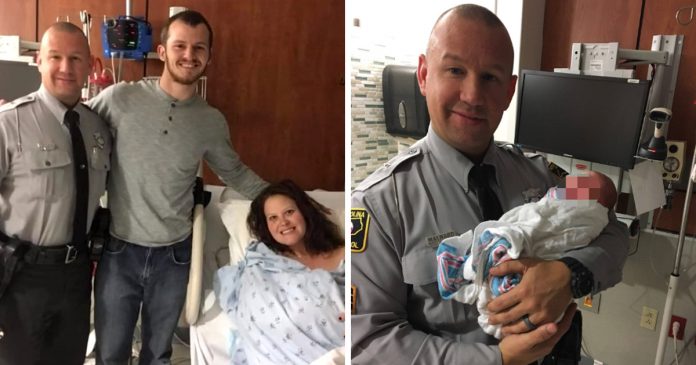 A North Carolina state trooper had the shock of his life when a speeding ticket stop turned into him helping to deliver a baby on the side of the road!

The couple in the mini-van, Jimmy and Laura Baker, were rushing to the hospital at speeds of 85mph when they were pulled over by State Highway Patrol Sgt. Brian Maynard, who didn’t know Laura was in labour!

This meant that plans to rush to the hospital before their baby girl would arrive were out the window! It was too late.

The desperate couple, who were now in the middle of giving birth, begged for Brian’s help—they knew they were going to have to deliver the baby themselves.

“I was telling them the baby was in my pants and he needed to help me,” Laura laughed.

It turned out the baby girl was four days ahead of her expected arrival date, shocking the couple.

Brian frantically called an ambulance to assist them but as it didn’t arrive in time, he decided to try his best at lending a helping hand.

He grabbed a blanket and gloves from his police car.

The brave officer called the whole experience both “scary” and “rewarding”.

Speaking to WRAL, he said, “I just relied on my training that I had been given during some of our classes.”

“I did the best I could do with what I had available’.

Laura and Jimmy decided to call their newborn baby girl Halyn, and later took her to a hospital.

For his first time in helping to give birth, Brian did an incredible job! Halyn is reportedly perfectly healthy. Well done Brian!