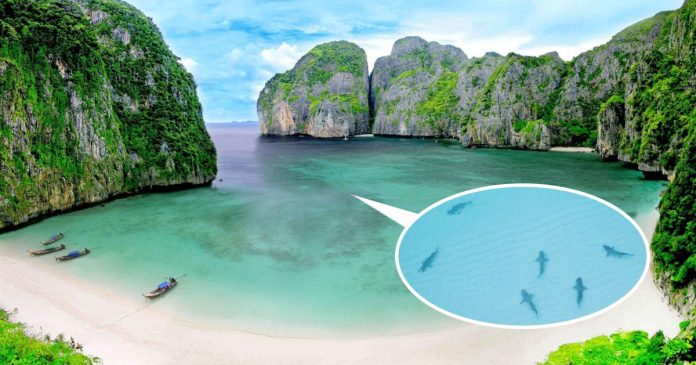 Sharks have finally returned to the world-famous Maya Bay in Thailand just months after its tourist ban—and new photos are absolutely breathtaking.

The stunning beach on Phi Phi Islands with crystal-clear blue waters attracted scores of tourists after it was made famous in The Beach, starring Hollywood Leonardo DiCaprio.

Before its closure, crowds of up to 5,000 flocked to see its beauty every day.

Sharks stopped coming and tourists damaged corals and Maya Bay’s reef. People stood on the corals, crushing and killing them.

And in high season, beaches were so overcrowded that there was hardly enough space to walk around!

But nature has finally taken the gorgeous bay back after local authorities imposed a tourist ban in June for its rehabilitation—to let nature recover.

“Nature can recover itself. But when the impact from tourism is too much, just like humans, it’s exhausted and needs to rest,” marine biologist Kamolwat Napadolrungrueang told ChannelNews Asia.

In just six months, it’s like a completely new beach!

Because all the tourists and boats are now gone, the sharks are back!

Up to 90 blacktip reef sharks were pictured swimming through the clear waters reported ChannelNews Asia.

In the morning and late afternoon, the sharks swim close to the shore as the tides are high and temperatures are lower.

Marine scientists also believe they come to Maya Bay to give birth, as it is sheltered.

It finally has its powdery-white sand and magical glass-like water again.

And a whopping 5,615 colonies of new corals have been grown in Maya Bay!

When Maya Bay re-opens again to tourists, they will only be able to get to it by Loh Samah Bay at the back—boats are permanently banned too.

We can only dream about how peaceful it is now without the swarms of tourists taking selfies. Paradise!