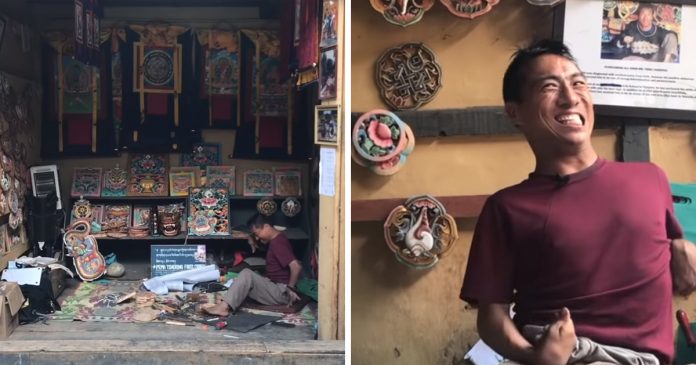 Meet Pema Tshering, a talented artist from Bhutan with cerebral palsy who uses only his feet to create stunning wood carvings and paintings. Once abandoned by his parents as a child, he now funds them with his success. His inspirational story has made the internet (and us!) super emotional.

The successful 31-year-old, who was abandoned by his parents when he was six, is paralysed from the hip up.

Under the care of his grandparents, Pema made bows and arrows out of bamboo.

But his life turned around at 18 when Her Majesty the Queen Mother Tshering Pem Wangchuk visited his village, adopted him and funded his education at Bhutan’s famous art school Institute of Zorig Chusum in Thimphu.

Pema has spent his whole life using his feet as his hands!

But that hasn’t stopped him from making the most of his talents—now he creates beautiful pieces of art by holding a chisel and hammer between his toes.

“She asked if there was anything that I wanted. I told her I wanted to go to school. I didn’t want money or anything else,” said Pema.

The generous Queen Mother even helped Pema to open up a small shop inside the Simply Bhutan museum in Thimphu so he can make some money!

Pema now makes up to $100 a month selling his gorgeous creations.

His artworks are so beautiful and intricate—it’s so hard to believe someone made them using just their feet!

Now, instead of feeling resentful or angry, the talented artist even financially supports the very parents who abandoned him as a child. He is even building them a two-storey house in Mongar. What an amazing son!

“I want to help my parents because if you don’t help your parents, it’s like disrespecting them. If you don’t respect your parents, whatever work you do, you’ll be unsuccessful in life,” Pema said.

The ambitious artist doesn’t want to stop here—his next goal? To become an art teacher and start his own carving business.

Pema’s inspirational story is a reminder to us all to dream big and never give up no matter what your circumstances may be!

Watch Pema create some beautiful pieces of art below: