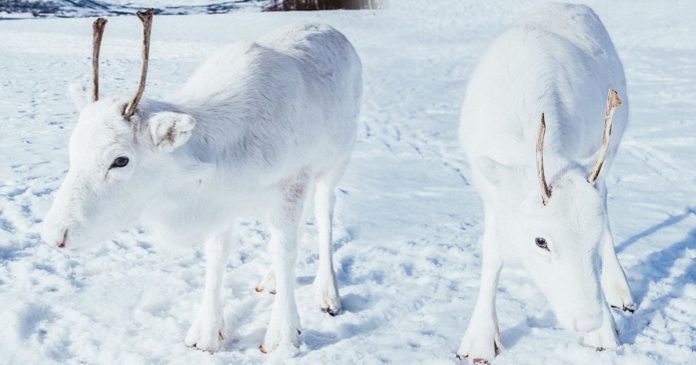 Mads Nordsveen is a professional and well known photographer who has travelled the world capturing spectacular shots ranging from beautiful French valleys to California beaches and the ever-so-lovely Northern Lights. But it was a simple encounter in his hometown Norway that still gives him the shivers.

He was travelling with some friends in the northern Norwegian island of Senja when they suddenly spotted a little reindeer calf, white as the snow that surrounds it. If it weren’t for its dark eyes and bone-colored antlers, it would have disappeared right into the snowy background.

It looks magical, doesn’t it?

Then, he noticed that a large reindeer was standing a few yards away from the calf. He believed it was the mother, but her fur was brown. Nordsveen and his friends quickly stilled themselves as to not make themselves appear threatening.

“The calf seemed a bit scared at first, but we sat completely quiet and were very calm, and eventually it came quite close,” Nordsveen said.

He was so struck by the sight of the white reindeer that it took quite a while for his photographer instincts to kick in. He immediately grabbed his camera and started shooting when it did.

It looks so beautiful and regal. It’s nothing like you’ve ever seen before.

“It was a very special moment, it felt so magical!” Nordsveen said. “We looked straight into each other’s eyes.”

Nordsveen believed that the calf stayed close to them for about five minutes before it went running back to its mother. Then, both of them disappeared into the forest.

Nordsveen posted the pictures on his Instagram last Monday, which quickly clocked tens of thousands of likes.

The indigenous Sami people who used to herd reindeers in Northern Norway told him that white reindeers are extremely rare. They are also believed to bring happiness to those that see it.

A grandmother of Scandinavia’s Sami people herding reindeer with her grandsons in Northern Norway.

Not all white animals are albino. Some have leucism, a condition that causes an animal to lose some or all of its original pigmentation. Albinism causes the animal to have no pigmentation at all, and albino animals usually have pink eyes.

Nordsveen said he began capturing Norwegian landscapes to fulfill his love for travel and the great outdoors coupled with his extreme desire to record them. Just when he thought he’s seen it all, it was a white reindeer that shook him to his core.