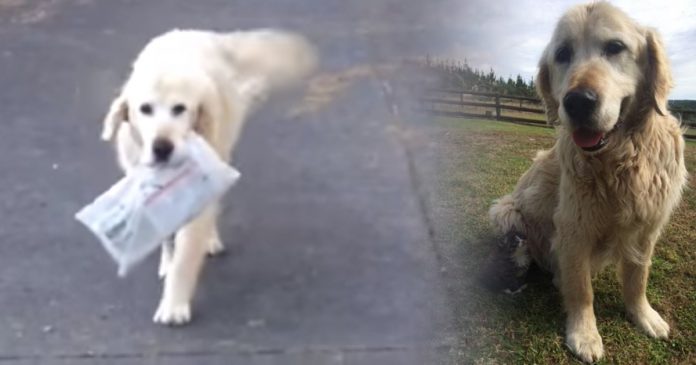 Brent Cooper, 55-years-old from rural Auckland, shared an adorable video of his Golden Retriever, Kuva, proudly getting his newspaper for him every single morning until he passed.

Mr. Cooper said, “We live in a rural area and our daily paper is tossed onto the bottom of our driveway.” “I went to get it one morning but it was already on the front porch. At first, I thought the paper guy was just doing a good deed. The driveway is 50 meters long and it was raining that day.”

However, the same thing happened the next morning, and the next. Mr. Cooper woke up a little early the next morning to see his 4-year-old Retriever trotting up the driveway with the newspaper in his mouth.

Look at Kuva, so proud!

Mr. Cooper stated, “He must have seen me walk down and get it every morning. He taught himself to do it for me. He did it every morning for the next ten years of his wonderful life, rain, hail or shine.” “Until last year, that is. Rest in peace, Kuva, you were indeed a super cool dog,” he said.

The Facebook post has since garnered more than 12,000 reactions after it was shared on popular dog lovers’ page, Cool Dog Group.

Mr. Cooper said, “My daughter Shelby or I would walk down the driveway every morning to grab it and Kuva would be hanging out on the porch with his tail wagging.” “When I saw him bring the paper, I thought Shelby had taught him, but she hadn’t,” he said.

Kuva and Shelby were very close.

Mr. Cooper said Kuva collected the newspaper every single day until he passed away at 15-years-old. “Even as he got older he was still bounding up the driveway with that paper,” he said.

“The day before he passed away, he got the paper. But the next day, he went out and was wobbling. He immediately fell over,” Mr. Cooper recalled.

“We rushed him to the vet and we held onto the hope that he’ll be okay. But he was worse the next day and we had to have him euthanized. He went really quickly,” Mr. Cooper said sadly.

Kuva is in a better place now.

Mr. Cooper said he has been overwhelmed with the response to the video. We are confident that Kuva is now in a better place where “all the good boys go”!