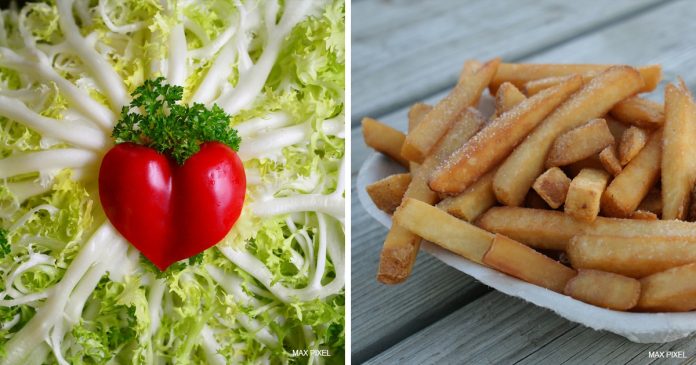 It can be a struggle to maintain a healthy and balanced diet, and nobody wants to eat the same old boring salads every day, right?

So when a new study was released saying French fries can be healthier than salad, the internet went wild.

Americans eat an average of 115.6 pounds of white potatoes a year—two-thirds of these are French Fries, potato chips and other processed or frozen potato items—according to Agriculture Department statistics.

Scientists from Israel at the Weizmann Institute gave us all permission to load up on the fried goodies after monitoring the blood sugar levels of 800 people who ate the same meals.

The study found that some people could eat fries and have a lower glucose spike than eating a salad.

Professor Eran Segal, who led the study, said, “The huge differences that we found in the rise of blood sugar levels among different people who consumed identical meals highlights why personalized eating choices are more likely to help people stay healthy than universal dietary advice.”

Basically they’re saying you do you and don’t follow the crowd! We all react differently to each type of food.

Many were so excited at the thought they could ditch the rabbit food and were over the moon on Twitter.

One said, “Yaaass! Fries is love, fries is life.” They aren’t wrong.

Others were sceptical, however.

“Those researchers need to research themselves,” one commented.

While another wrote, “No. Stop trying.”

Meanwhile, French fries lovers had their bubbles burst after a Harvard University professor said we should only be eating 6 fries per meal.

Professor Eric Rimm highlighted the health risks of consuming too many potatoes, calling fries “starch bombs” and “a weapon of dietary destruction”. Nooo!

“I think it would be nice if your meal came with a side salad and six French fries,” Rimm said.

Nutritionist, Lindsay Moyer, warned against fries topped with cheese, chili, or other dressings, which can go up to a whopping 1,000 calories per serving.

And scientists say sauces like mayonnaise can add a whopping 100 calories per serving to your meal!

We recommend eating everything in moderation though. Be sure to get in your 5 a day, and maybe a few cheeky fries, we won’t tell!