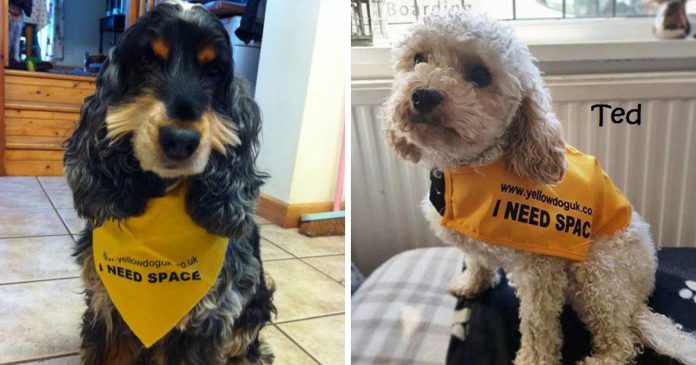 Have you ever seen an adorable dog while out on a walk and petted it without thinking? Have you ever considered that they may want space? Nope, neither have we—we’re guilty too.

But an innovative campaign is aiming to change exactly that.

A charity has launched a global campaign called ‘The Yellow Dog Project’ which it hopes will make doggy fans more aware of the wellbeing of pooches.

Dogs which need more space wear a yellow garment to let everyone know not to approach them.

A dog which might need more space could be sick, elderly—or just a little shy and nervous!

“If you see a dog with a YELLOW ribbon, bandana or similar on the leash or on the dog, this is a dog which needs some space.

“Please, do not approach this dog or its people with your dog. They are indicating that their dog cannot be close to other dogs. How close is too close? Only the dog or his people know, so maintain distance and give them time to move out of your way,” The Yellow Dog Project’s official site reads.

So, the next time you see a cute pup wearing a yellow ribbon, bandana or other items, please stop and think again!

And don’t worry—just because a dog is wearing a yellow item, it doesn’t mean it’s aggressive. It probably just needs some time to itself—just like us sometimes.

Other reasons why a dog may need more space could include, being in “training”, “in heat”, or it could have “had a bad experience with another dog”. The pup could also be a rescue dog in rehabilitation, the official site explained.

Dog-lovers all around the world have hailed the movement as “brilliant” and “the best thing to happen since the invention of the leash!”.

The campaign has already been implemented in 45 countries so far, and you can purchase cute yellow items, such as a vest, flag, bandana, lead, on its official site.

What do you think of the campaign? Let us know what you think!

Don’t forget to be respectful and always ask a dog owner for permission to pet their pup!