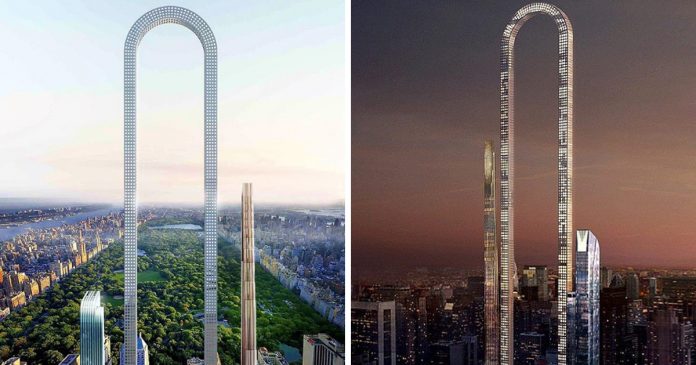 The world’s first U-shaped skyscraper, named the Big Bend, is set to smash records as the longest building in the world.

The building, planned for construction on Billionaire’s Row in New York, will be nothing short of eye-catching, as proposal plans indicate the tower will measure a whopping 1,219 meters in length from end to end.

That means that when built, it will stand at almost twice the height of some of the tallest skyscrapers in the world!

That’s including the world’s current tallest building, Dubai’s Burj Khalifa, and the capital’s own World Trade Center, which is the tallest in the Western Hemisphere.

And at its highest central point, there will be a stunning U-shaped bend.

New York-based architecture firm Oiio, said, “If we manage to bend our structure instead of bending the zoning rules of New York we would be able to create one of the most prestigious buildings in Manhattan. The longest building in the world.”

Many have questioned how people will be able to get around to U-shaped tower.

But Oiio already has a solution in mind.

Because of its futuristic horse-shoe like design, Oiio plans to use the latest elevator technologies—Thyssen Krupp’s MULTI system— “an innovative track changing system”.

This means elevators in the tower will be able to travel horizontally and vertically through shaft loops.

“The Big Bend can become a modest architectural solution to the height limitations of Manhattan.”

“What if we substituted height with length?” the company asks on its website.

“We can now provide our structures with the measurements that will make them stand out without worrying about the limits of the sky,” Oiio added.

The striking designs are still in proposal stage, the Big Bend’s designer, Ioannis Oikonomou, is currently seeking investment to bring his skyscraper to life.

It’s definitely a skyscraper of the future!