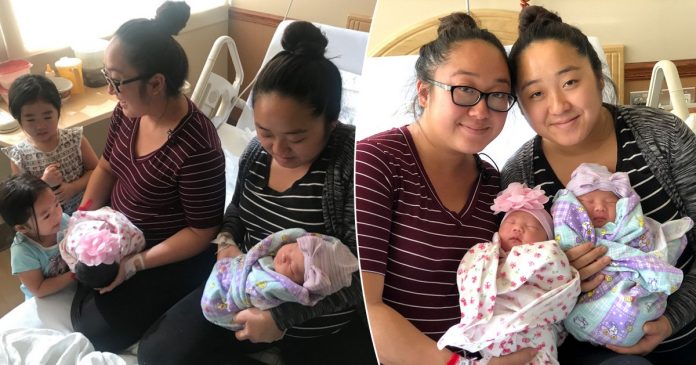 Twin sisters Bao Nhia Julia Yang and Bao Kou Julie Yang proved twins share a unique and special bond, when they gave birth to daughters on the same day and in the same hospital.

The pair, who grew up in Fresno, California  shared everything growing up together.

So when they both revealed they were pregnant at the same time, everyone couldn’t believe they hadn’t planned it.

The inseparable sisters were so excited to share the most special journey of their lives together!

They couldn’t believe their daughters could be born within just a few days of each other.

When Bao Kou began to feel some pain and spotting in November, she called Bao Nhia to say she was going to get checked-up at hospital, thinking she was about to give birth.

She got the shock of her life when her twin, Bao Nhia told her she was also going to the same hospital with what she believed to be labor pains as well!

Bao Kou told local news site KPGE, “I started having like, I started spotting, so I think I knew that I was going to be in labor. And then I told her, and she was like, ‘I’m having pain here and there, too. I might be in there with you, too.”

The two sisters were admitted to hospital on the same day and their daughters were born an hour apart—meaning they have the same birthday, just like their moms do!

Nadalie Xiong weighed 7 pounds exactly at birth, while her cousin Sandra That was born 7 pounds, 3 ounces.

It was meant to be!

She admitted she hadn’t seen anything quite like this, saying the twins had “very unique timing”.

Bao Kou and Bao Nhia are over the moon their daughters will share a special bond just like them.