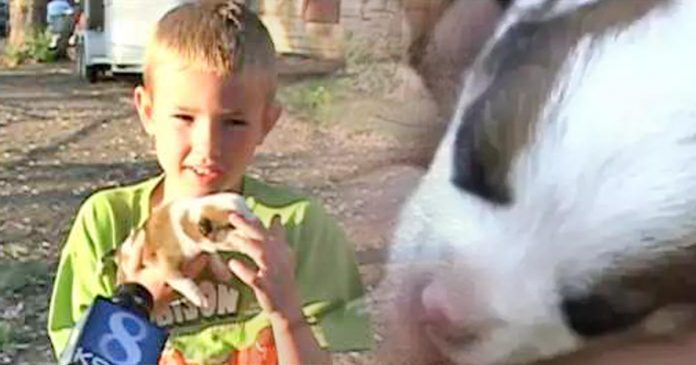 An adorable puppy shocked the world when it fell 30 feet from the sky in Los Banos, California—and survived.

The lucky pup found its new home after it escaped the clutches of an eagle-eyed hawk and plummeted down to Earth.

The hawk that had almost gotten the puppy lives on top of a tree in the family’s property.

After its huge fall, the puppy was discovered lying on the ground by a seven-year-old boy named Taylor Calloway.

The boy hugged the two-month-old pooch and called his mom, shouting “Puppy, puppy!”

“He’s like one of our family,” he told KSBW-TV.

The poor pup’s tiny body was covered in marks where it had been gripped by the bird’s talons.

“‘All of a sudden I saw this little puppy laying there, he was almost dead,” Taylor explained.

But the little fighter made sure he wasn’t going to be the hawk’s dinner.

The boy’s mother, Elaine Bouchard, thinks the canine managed to free itself from the grips of its hunter.

She told KSBW the puppy is so “wiggly” and described him as “such a little bulldozer.”

“I can actually see him wiggling right out of the talons of it,” Elaine added.

The injured pup was taken to the vet and was treated for dehydration, and received some puppy vaccinations before being taken home.

The cute baby is so hungry that he tries to suckle the fingers of his new owner!

Now the pup, who made a great escape, has been accepted into the family—who already own chicken, two horses and three dogs. It seems like he’ll fit right in!

Elaine said she wants to make sure the little pooch is never harmed again.

‘My thoughts are when god drops a puppy from the sky, you keep it!’ Elaine said.

The puppy has been named T.J Heavenly after the youngster who discovered him and to honour his remarkable story of survival.

India’s biggest bull worth £2.5 million that drinks whisky and weighs...

His dog did not stop barking overnight. The next day, the...