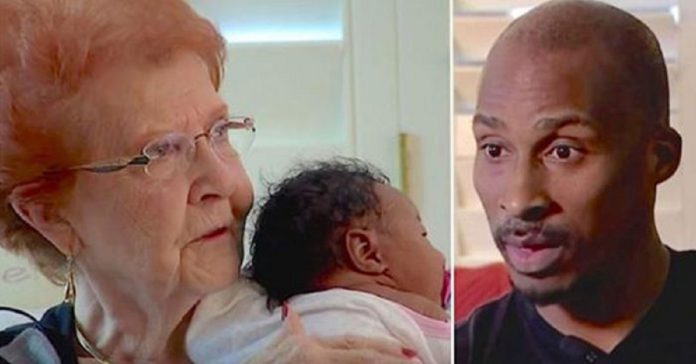 Rubin Swift flew to Phoenix, Arizona as soon as he found out his daughter was born. However, the airline company stopped him from boarding the plane back to Cleveland because of their policy: no infant under the age of seven days or without a birth certificate can board the plane.

With no money and no connections in Phoenix, Swift was devastated. He immediately went to get custody of his newborn after having ended the relationship with the baby’s mother.

Then, he remembered a kind volunteer, Joy Ringhofer, who he met at the hospital where his daughter was born. He recalled how soft-spoken she was and that she had given her number to him earlier in the day when he left the hospital with his daughter for the airport.

To his big surprise, the 78-year-old woman said, “You’re coming home with me.” She opened her home to Swift and his daughter just until his daughter, named Andrea, reaches 7 days old and be allowed to fly home.

Andrea being cared for by Joy at her house.

He was extremely touched and grateful by her grand gesture.

Joy kindly offered her home to Rubin, who stayed for a few days.

Rubin said Joy was like an angel. “She bonded so well with Andrea. Whenever my daughter hears her voice, her face would light up.”

An angel in disguise.

Joy said to People, “We just knew that we’d always be in touch from that day forward. We started out as strangers and ended up as good friends. Rubin is very grateful to me, but I’m also very grateful to have had the opportunity.”

Joy accompanied them to the airport.

Rubin wouldn’t have made it if it weren’t for Joy’s help.

“Pay it forward,” Rubin said. “Let’s return to a time when we all cared for one another. That’s what I’m hoping will happen.” Humanity restored!