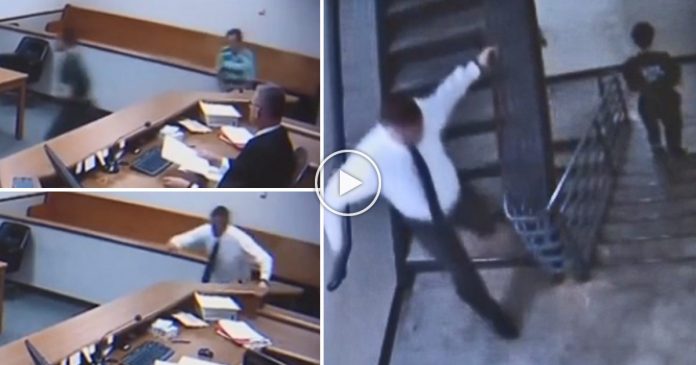 Recently, a bizarre incident was recorded through a surveillance camera showing a judge taking his robe off to chase two suspected criminals.

The incident took place in Winlock, Washington inside a courthouse.

The shocking footage shows two suspected criminals, Tanner Jacobson and Kodey Howard are waiting before their case to be heard before the judge.

However, the criminal duo attempt to escape when there is no guard in sight as the two use the opportunity to exit the courtroom

One of the pair accidentally stumbles during the escape and loses one of his shoes but still manages to run towards the staircase.

Luckily, Judge RW Buzzard who witness the two criminals trying to escape from the courtroom leaps out of his chair, throws off his robe and quickly chases after the suspects

The video shows the two in a hot pursuit with the judge who manages to grab one of the criminals just before they can exit the building through a back door.

The brave judge managed to catch Howard while his mate, Jacobson was caught by the police a few blocks from the courthouse

The officials in the courtroom were unable to help Judge Buzzard in the hot trail since there were two other inmates that in their care.

Sheriff Rob Snaza told media that such cases are rare. “We’re very aware of what’s going on at a moment’s notice. These things don’t happen very often. They’re few and far between,” Snaza told a newspaper.

Jacobson and Howard have been charged with second-degree escape and are currently held on a $50,000 and $100,000 bond respectively.