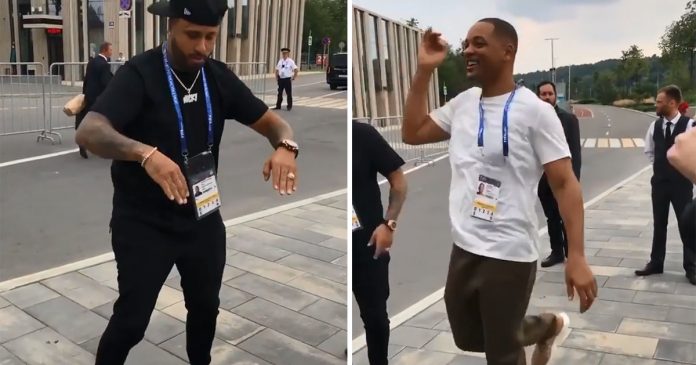 Hollywood superstar, Will Smith is not only a well-known rapper and actor but apparently, he is also a dancing machine!

Apart from his rapping and acting skills, many know that the 49-year-old actor loves to dance and he has proved his dancing skills over the past years with many viral dance challenges and videos featuring him.

Recently, the famous actor and musician was joined by American-Colombian singer Nicky Jam and Kosovar singer and songwriter Era Istrefi at the closing ceremony of World Cup at Moscow to perform their latest song, “Live It Up”

“Live It Up” is also the official anthem for the 2018 World Cup and Will was at Moscow alongside his fellow musicians to promote the new track.

While in Moscow, the actor had an epic street dance battle with Nicky and the video of the popular artists have gone viral on the internet thanks to the hilarious dance moves performed by the duo

It first seemed like they were doing a fun take of some of the dances that have gone viral these few months.

A few seconds into the video, however, shows both Will and Nicky later faced each other in a truly epic street dance battle!

When the video was uploaded on Twitter later on, it quickly attracted many people and so far, the video has been watched over 2.44 million times on Twitter alone

Watch the full video of the dance battle here: