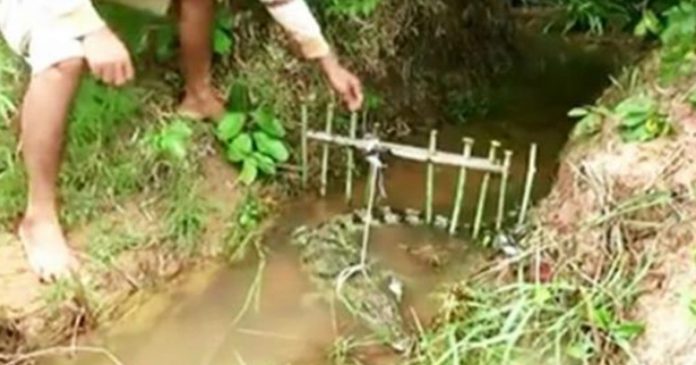 In some parts of the world like Cambodia, China, and the Philippines, crocodile meat is eaten on a regular basis just like any other types of poultry meat.

Dubbed to have a similar taste to chicken, crocodile meat is believed to have medicinal effects on respiratory illnesses like asthma.

Hence, it is not surprising to see locals in these countries get their source of crocodile meat by setting up a trap on their own to catch crocodiles.

In this video, a young boy shows how to set up a crocodile trap by using simple tools like bamboo shoots and thin wire. To set up the trap, bamboo shoots are first aligned with a small gap between them

Thin wire is then used to secure the bamboo shoots on its place. A chicken carcass is also secured on the trap to lure the reptile

The boy then leaves the trap for seven hours before coming back to inspect the catch. By the time he comes back, a small-sized crocodile is seen stuck inside the trap.