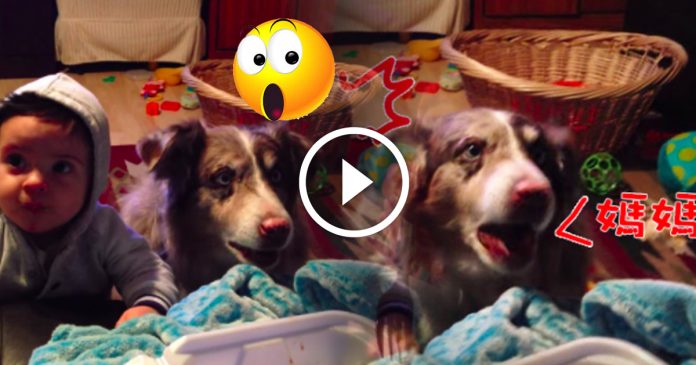 When Andrea Diaz-Giovanini tried to get her nine-month-old son to say “mama” while bribing him with food, she did not expect to hear the word coming from her pet dog instead!

In this hilarious video, Andrea was feeding her son and she was trying to get her son to say “mama2. At the same time, her pet dog, Patch was there next to the baby, eyeing for the food as well.

When Andrea offered to give a spoonful of the food as a reward for saying “mama”, Patch could not wait for his treat time and beat the little boy by saying “mama” first!

Clearly, Patch was hungrier than the little boy!

Making things even more hilarious, the baby boy seemed to realise that he was beaten by Patch so he decided to stiff-arm the Australian Shepherd to prevent him from saying the word any further