All cats have different personalities. Some cats tend to meow frequently when they want your attention while some may communicate in a strange manner just like this cat.

This unknown cat was desperate to get inside the house but when he realised that his meowing did not convince the house owner to let him inside, he switched his pleas to crying out in an unusual sound.

The house owner who obviously did not understand what the cat was trying to say seemed puzzled at the cat’s persistence and constant yelling. Poor kitty just wants to get inside the house… 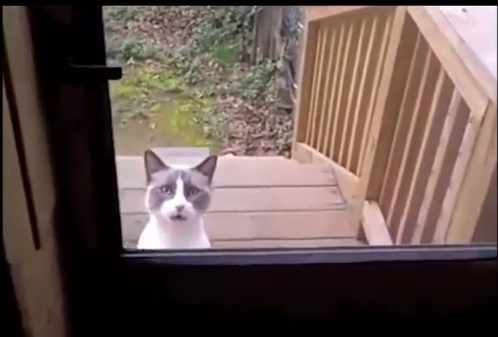 When the video was uploaded on YouTube, it quickly became an internet sensation as many tried to decode what the feline was trying to say. Some of the popular comments wrote that the cat was asking for fish and beef noodles in Chinese. One comment wrote: “In Chinese mean ‘I I I want that fish beef beef noodle’.”

There are even comments that wrote the cat was indeed speaking in Arabic. “LOL the cat is speaking Arabic.” one comment wrote while another agreed: “I speak Arabic. The closest word I found it to be was ‘No, No’.”.

If you speak Chinese or Arabic language, can you understand what the cat was yelling about? Share your thoughts in the comment section after you watch the full video here