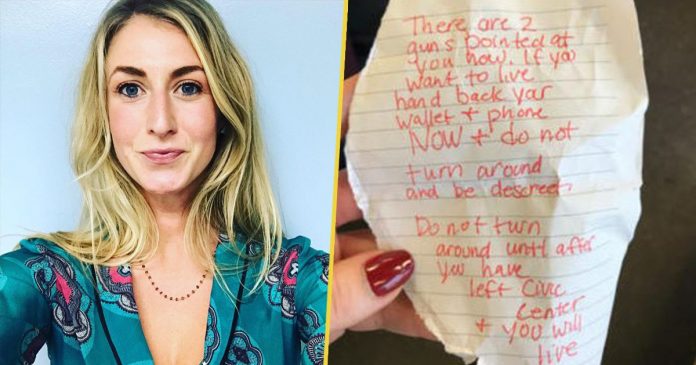 How would you react when you are put in a potentially life-threatening situation as you were going about your day as per usual? One woman from the US found herself in this exact situation where her life was put on the line, but with her quick thinking she managed to thwart the criminal in question.

Julie Dragland said she boarded a train in Daly City and was heading home to Dublin, California when a person with dark clothing sat behind her and placed a note on her lap. Dragland was taken aback at first but she read the note anyway. She quickly became terrified because she realized that her life was in imminent danger.

The note read, “There are 2 guns pointed at you now. If you want to live hand back your wallet + phone NOW + do not turn around and be discreet. Do not turn around until after you have left Civic Center + you will live.”

Her heart pounded with uncertainty as to what her next course of action should be. She was not sure that there really was guns pointed at her but decided not to take the risk and find out by turning around. She looked to the people facing her and mouthed a silent ‘help’ but nobody realized her plea.

Surrendering her wallet and phone was out of the question because she was leaving for London the next day and needed her belongings. She had no intention of giving in to the criminal’s demands.

Dragland was desperate to seek help and decided that her only course of action was to draw as much attention to her as possible and throw the criminal off guard. She slumped to her side and faked having a seizure.

Dragland who was worried for her safety recalled and said “So, I was like, ‘If I fake a seizure, or fake that I’m passing out … they could just think that I’m scared and reacting.'”

She continued “So I slumped over to the left and started shaking, and people started to notice, and they were like, ‘Are you OK?” A few people came over to her and she said because she “caused a commotion, the person got off at the next stop.”

She calmed down and said she was fine after relating what had just happened. She got off and went straight to the authorities to file a report. The BART police said that the  surveillance video from the train corroborates her report. “There is no indication from the video the suspect was armed with any weapons,” the police added.

Dragland also noted that she was surprised by the fact that even as she made a scene, “the majority of the people on the train had no reaction.” Photos of the culprit has been posted online to warn other passengers to be wary of the criminal. The felon can be identified as a white woman with blonde hair.

A brave young boy challenged death by going through a blazing...