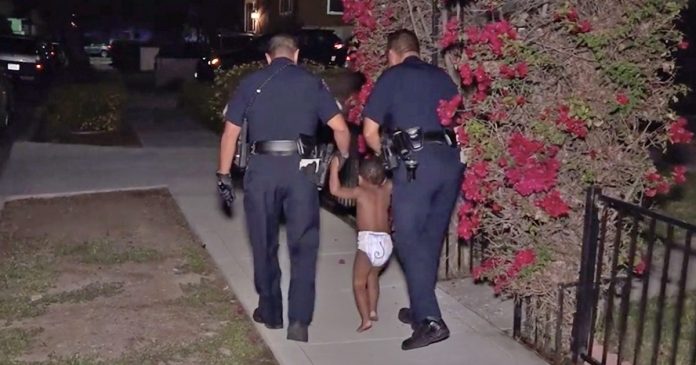 A video of two policemen accompanying a child back to his home has been circulating the internet. The footage shows the little boy happily holding hands with the two policeman while while jumping and swinging between them.

It is likely that this child did not know that he had gone astray. Luckily for him, he was picked up by these two police officers. It was in the wee hours of the morning when a man spotted the 2-year-old alone in front of a wine shop at Normal Height, San Diego.

He was understandably worried for the child and so he called the police. He then got out of his car and waited with the toddler until the authorities arrived to take the child and hopefully take him back to his parents.

Two policemen arrived and took the child into their care. They thanked the man for his vigilance and proceeded to try and find out where the child came from. They walked with the toddler around the neighborhood to see if he could point out his house but it didn’t work.

They almost gave up and was about to bring him back to the station when they got a report of a missing child from that area. It turned out that the boy’s parents were fast asleep when the cheeky toddler found his way out of the house. His mother woke up and found that her little boy was not in his bed or in any other part of the house.

She panicked and called 911 to report that her son was missing. The two officers who were still in the housing area took the mischievous toddler back to his home safely.

Although the case of the missing child concluded with a safe return to his family, many netizens blame the parents for their negligence.

A netizen wrote, “Another stupid parent not locking their doors, this could have had a tragic turn-out, go to the $.99 store by a freaking chain and put it on your door where he cannot reach it.”

Another commented, “When can we please start charging these irresponsible parents with negligence instead of always trying to brush things like this off as “accidents” or “hey, stuff will just happen” incidents? These types of things do not have to happen! Parents need to use common sense to safeguard the safety and well-being of their children.”

Not all blame the parents though as some commentors are more understanding and have gone through similar experiences. One internet user said,  “At 2 years old I escaped because I got a chair and climbed it to unlock the chain lock that I wasn’t able to reach otherwise. Little ones are smart, they watch adults and learn. Thank goodness he’s home safe.”

A netizen has said, “Such judgmental people. I remember a time when baby Jessica fell in a well, and nobody judged the parents, but supported and were there for them during their time of need. What happened? Makes me so sad.”

Regardless of what anyone says, let’s just be glad that the child is safe and back home with his family.

Here’s an adorable clip of the two policemen taking the 2-year-old back home: