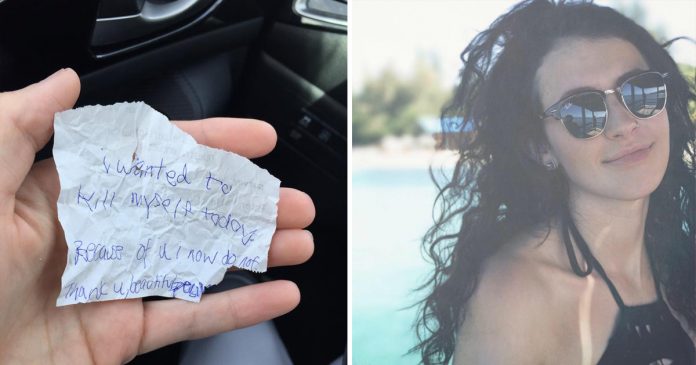 In this busy and fast-changing world, we oftentimes complain when we find ourselves entangled in a series of conflicts and affairs that we forget there are many less fortunate people who may have it worse like the homeless.

While it is true that we are all struggling in our own misery, sometimes it does not hurt to stop and help them in the best way we can offer just like this warm-hearted woman.

One day, while Casey Fischer was walking to Dunkin’ Donuts, she noticed a homeless man singing on the roadside while scraping up change from the street. Moments later, the homeless man walked into the same Dunkin’ Donuts she was sitting in.

In my happy place

It occurred to Casey that he only manage to scrape together a dollar so she offered to buy him a bagel and a cup of coffee. At first, the homeless man was reluctant to accept her offer but he eventually took Casey’s offer later.

Then, Casey invited him to her table where they shared a conversation. The homeless man whose name was Chris told her he was surprised at Casey’s kind gesture for a heartbreaking reason. He was used to being looked down by the public simply because he was homeless.

The hatred and constant humiliation he received from the public had somehow thrown him into depression and paranoia.

He further admitted that it was because of his past involvement with drugs that had put him into his current state and he regretted it ever since. However, Chris still harboured dreams of becoming a son that his mother could have been proud of.

Chris’s mother had passed away from cancer a long time ago but it never stopped him from dreaming to fulfill his promises to her.

Chris and Casey talked for over an hour before Casey realised that she needed to go back to her class. Just before she left, Chris told her to wait for a while as he scribbled on a wrinkled receipt and pushed the note into her hand. He apologised for his messy handwriting before they parted their ways.

When Casey unfolded the receipt, she realised that her simple gesture had meant so much more than just feeding a homeless a coffee and a bagel. There, on Chris’s note, he wrote: “I wanted to kill myself today. Because of you now I do not. Thank u, beautiful person.”

today I went to Dunkin and saw a clearly homeless guy singing on the side of the road and picking up change. Eventually…

Sometimes, we never know that the smallest action could have the biggest impact on someone’s life. In Casey’s story, all she could do was to lend an ear and sympathise with a homeless man but little did she know that her kind gesture had stopped him from taking his own life that day.