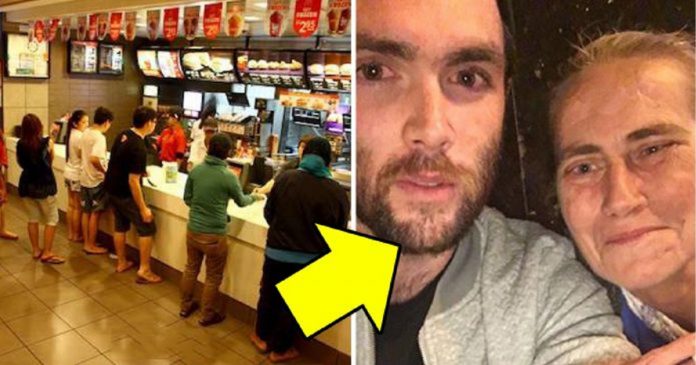 It is easy to ignore the people who are in need of dire help until we find ourselves in their shoes. However, Jonathon Pengelly did not want to wait until the very last minute to help someone. So, when he saw a homeless woman being turned away by a McDonald’s staff after asking for a cup of hot water, he immediately stepped in.

Mr. Pengelly was thinking of ordering a chicken burger and some fries as his late-night snack when he allegedly saw a homeless woman being turned away at the fast-food restaurant’s door after she attempted to go inside for a cup of hot water.

“I couldn’t help but notice the lady in front me, all she asked for was a cup of hot water. The member of staff told her “no” 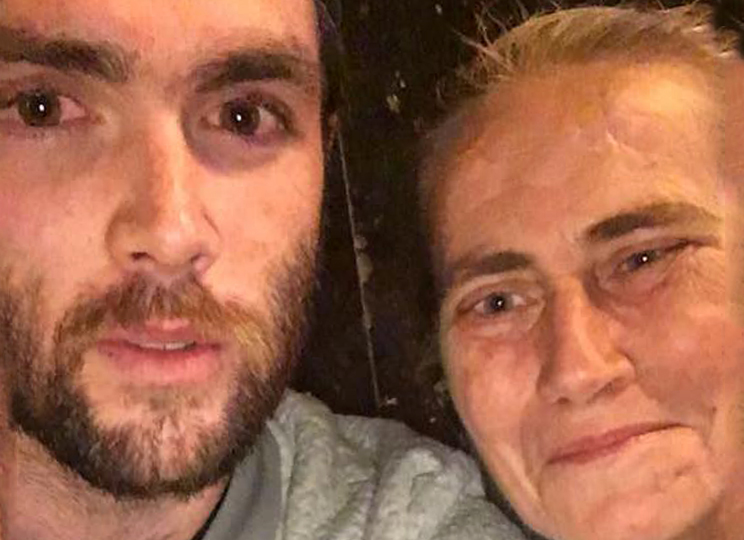 “I don’t know what was going through their mind but a lady, clearly homeless was asking for a basic human right; and for a multi-billion pound company, for them to say no is disgusting!”

Instead of ignoring her, he went to her and asked her what she would like to have from the McDonald’s menu.

“My heart was shattered! So I spoke to her and told her to order what she wanted, expecting her to order everything. I was so shocked. She asked for a single cheese burger and that was it. We bought as much as we could carry so I knew she wasn’t going to be hungry.”

After purchasing some food and drinks, Mr. Pengelly accompanied the homeless lady, called Polly and sat down on the street with her.

He claimed that some passers-by “laughed” at them when they sat on the street.

“I couldn’t just leave this lady go, she was so warming and so lovely. So I sat with her, on the cold hard floor, in the middle of winter and you know what I did? I cried my eyes out,” he wrote on his Facebook 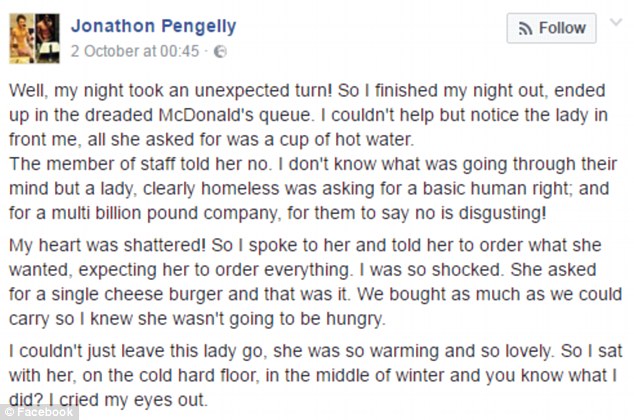 He then said that he invited Polly and her friends to his house where he and his friends cooked enough food for her to eat for the next few days.

“Polly and her mate have had showers, brushed their teeth and they both said they have ever felt so appreciated in their life. I’m no saint, but this small act of kindness cost me about £20 (USD 28.33). I know 90% of people reading this will earn about 10 times that a day.”

He continued: “It costs nothing to be kind, and I genuinely hope people share this to raise awareness of homelessness throughout the UK!

“Me and Polly have chatted on the phone and I’ve promised her that she will never go hungry or cold again! I’ve given her blankets, pillows and a back pack full of food.

“If you see someone on the streets, don’t look down on them like they’re nothing. You don’t know what they’ve been though! Spare a little thought!” Mr. Pengelly ended his status.

Following Mr. Pengelly’s claim who has gone viral with over 150,000 likes, McDonald’s denied his claim that the homeless woman was refused water and instead, they suggested that she had been banned from the premise beforehand because of an anti-social behaviour.

A spokesman said: “There is no McDonald’s policy to ban homeless people from our stores and the vast majority of such requests are granted by our restaurant teams.

“Working with the local police, our Cardiff stores have had to ban a number of individuals due to illegal and anti-social behaviour which is why this individual was refused entry to the store.”

Nevertheless, Mr. Pengelly’s simple act of kindness serves as a lesson to all of us to never ignore those who are less fortunate. We never know that a simple gesture like providing a cup of water might mean the world to them.