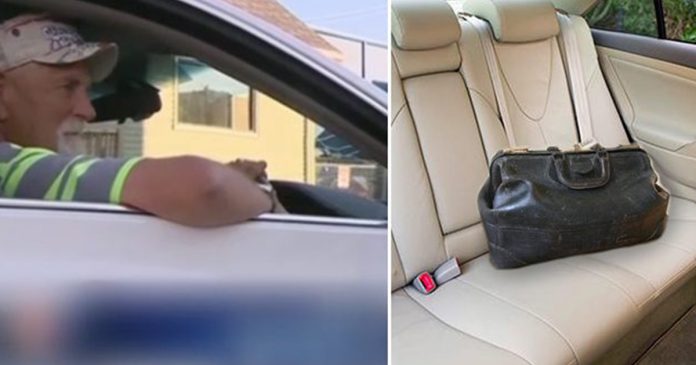 Sometimes in life we are faced with unexpected situations. The same can be said about Raymond “Buzzy” MacCausland from Middleton, New Hampshire, Boston, USA.

Raymond is a taxi driver and has been working for over 50 years. Over the years, he had encountered many items that people have left inside his cab. He had picked up cellphones, keys, and wallets. There is a time when he even found a briefcase containing US$ 10,000 once. As an honest man, he would always returned whatever he found.

One day, as he was doing his usual rounds driving and finding potential passengers, Raymond encountered someone who had left something that made him speechless.

Nothing could have prepared him for what was about to happen

While driving his taxi, Raymond picked up a homeless man from Boston. He drove to a motel. The man asked Raymond to stop for 5 minutes as he was going to run some errands. He promised to return.

After waiting for 30 minutes, the man did not return. Feeling concerned, Raymond went inside the motel and asked the receptionist. The workers did not know about the man he was talking about.

Suddenly, he noticed a backpack behind his cab. Raymond stopped his cab and found that the bag is filled with cash that is worth a total US$ 187,000! Raymond brought the cash to the police station.

“That’s the way I am. I don’t steal anything; I’ve never been a crook. It would have been nice to see a lot of money like that though—probably changes lives”

Boston police contacted the motel and they managed to find the owner. The man verified that the money was his. He inherited the money after his parents have passed away. He had a receipt to prove it.

Police Commissioner William Evans praised Raymond for his kind act and honesty. “His actions represent the high standards that our department has for our drivers.”

When asked why he returned the money, Raymond responded: “I think it was the right thing to do. A lot of people said, ‘You should have kept it,’ but I couldn’t do that.”

Watch the video below and share to encourage more acts of kindness.

13yo boy builds a tiny home for himself and spent only...