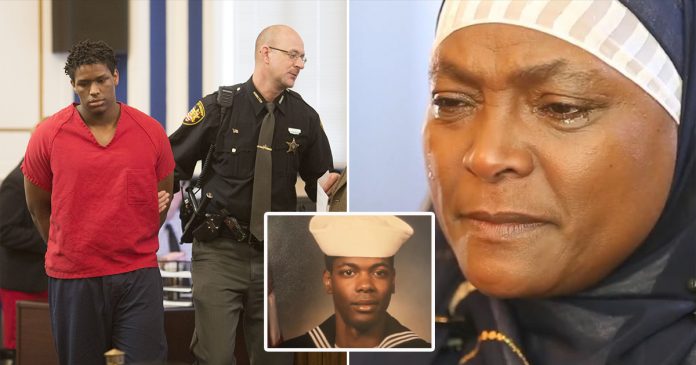 One night on June 28, 2015, in South Cumminsville, USA, Suliman Abdul-Mutakallim was walking home from White Castle. He was bringing home dinner for himself and his wife.

As he was walking along a street, suddenly, he was shot in the back of the head. Three unkown figures had robbed him. Suliman was still barely alive, face-down on the pavement, bleeding. Officers said that his wallet likely contained less than US$60.

Suliman is a 39-year-old Navy veteran, known by many as “Sam”

Police managed to apprehend the three suspects. One of them is Javon, a 14-year-old who was caught in a surveillance video pulling money from the front pocket of Suliman’s pants right after the shooting.

Javon was seen handing money to the other two suspects. One was 17-year-old Valentino Pettis. Police believe the third person was a man in his 20s, but he was never charged. They then walked down the street, taking the food with them.

Two years after the incident, in a court hearing, Javon was sentenced to prison after he pleaded guilty of murdering Suliman.

Rukiye, the mother of Suliman was present during the hearing. She is from North California and a Muslim who converted in her late teenage years. After the hearing, Rukiye asked Hamilton County Common Pleas Judge, Megan Shanahan for permission. She did something unexpected that most court officials claimed they have never seen before…

The woman approached Javon and hug him. She embraced his mother as well after that. Rukiye wanted to show that she can look beyond the act that killed her son.

Rukiye recalled back the time when Suliman died. She was at his bedside, holding his hand. for her and her religion, there is no such thing as goodbye. She whispered to her son, “Until I see you again.”

She vowed to do anything she can to help Javon. She wanted to make him a better person and promised to visit him regularly in prison.

“His death was already ordained. Maybe the purpose is to save your life.” Rukiye said

Rukiye’s display of huge heart have left many feeling touched. Truly, it is not easy to forgive a person especially if that person has killed someone you loved. As a mother she realized that her son’s killer also has a mother.

“Those young men – although they took my son’s life in the manner they did – we need to fight for them. Because they are going to come back out. And they will be older. But if they have no light, then this same disease is going to repeat itself and they are going to take another person’s child’s life and eventually their own. And every mother’s heart must feel this.”

Watch the video and see this heart-warming moment. Share it so that it serves as a lesson for all of us to always be forgiving.