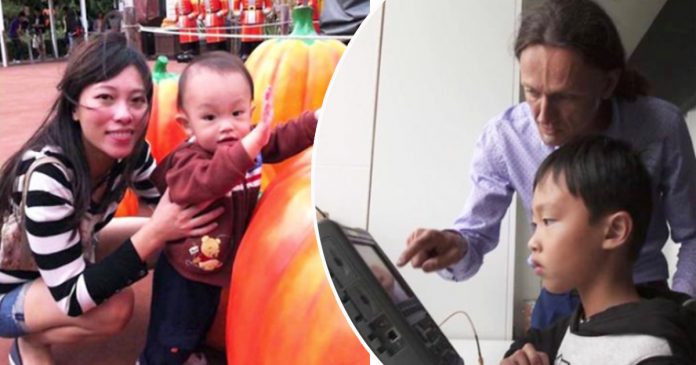 Unlike most kids who are struggling with their subtraction and multiplications, this 8-year-old child prodigy is a master of coding and has even developed his own computer program.

Meet Seth Yee, a genius kid from Singapore. When he was one and a half years old, he could already identify complex shapes such as differentiating between a hexagon and an octagon, and tell how many sides each shape had.

Amazingly, at the age of 4, Seth’s IQ was rated at 134. At five, he was learning science topics meant for Primary Six students. And at eight, he was already fluent in three computing languages – Arduino, JavaScript, and Python. To add, he learnt all of that by watching online tutorials on Udemy, an online learning marketplace.

Channel NewsAsia reported that Seth is considered as ‘gifted’ on the Stanford-Binet 5 Intelligence scale and is in the top 1% of smartest children in the world.

“When I code on the computer, I feel really excited because I might be able to program an AI (artificial intelligence) and I can have virtual conversations with it,” said Seth

Although Seth is considered intellectually advanced for his age, it comes at a price. His dad, Mr Ray Yee recalled many times he would throw tantrums when he did not get his way. During one time, he had a fascination with lifts – he could remember the different lifts and even how many buttons they had. He began insisting on taking only a particular one.

“It happened that the lift broke down, so he had a very huge meltdown, throwing a tantrum and then lying on the floor. It was very difficult for the both of us because they (the tantrums) can happen quite a lot.”

Ray: “He is highly intellectual, but that comes with other traits like asynchronous development”

This proved quite troublesome as he was unable to adapt to the formal schooling system in Singapore. Teachers often complained to Seth’s parents that constantly distracts the other students because he already understood what the teacher is saying. “Having to sit down and to listen to the teacher was like a prison to him.”

Soon, his parents decided to move to Melbourne, Australia where Seth is enrolled at Wooranna Park Primary School. They were attracted by the school’s curriculum which allows students to choose whatever they want to learn on a particular day.

“What struck me was the fact that he was so advanced. I honestly think that a lot of his thinking is at university level,” said Nolan

On The Red Dot took noticed of Seth and arranged for him to travel to the University of New South Wales a new quantum computer. There, Seth met with Professor of quantum engineering, Dr Andrea Morello who explained about his research.

Seth has also taken a role as a teacher. He conducted lessons on how to win in the famous video game, Minecraft.

“The most important thing for a bright and very curious kid like that, is to at some point learn to stick to one thing and take it to the end,” according to Dr Andrea

Though moving to a new and foreign country is tough and risky, Seth’s mom, Ms Daphlyn Gao was glad she and her husband made the right decision. She hoped that Seth will grow up to be successful and able to help mankind.

Daphlyn: “I felt that our sacrifice was worth it when we saw the change in him. He has learnt to care for the people around him”

With the support from his family and teachers, Seth will surely have a bright future ahead. It will be exciting to see his development and what his contributions will be. You go Seth!

Watch the video to know more about Seth and his fascination with quantum computing. Share this article so others can be motivated to pursue their dreams.