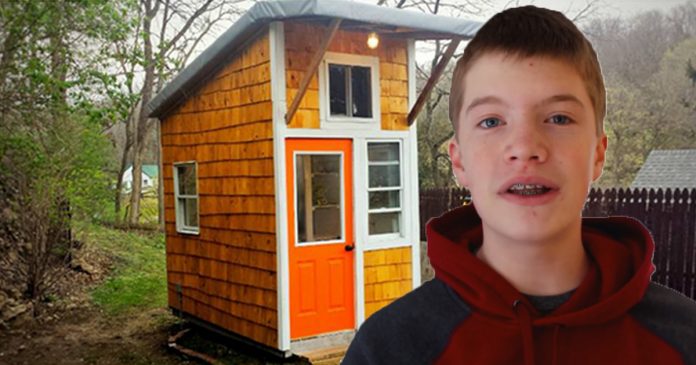 Most teenagers nowadays would probably spend time playing with their gadgets, video games, shopping, or going to the movies. But for 13-year-old Luke Thill from Dubuque, Iowa, he spent his time a little differently.

Believe it or not, Luke had managed to build his own small house behind his backyard. It is also fully furnished!

Luke and his little dream house

It all began one summer holiday. Luke was feeling bored so he decided to build his own little cottage. After doing some research, he had constructed a neat plan in order to start building his own dream house.

It took about a year for the house to be built

Luke mostly earned the money on his own to buy all the materials needed in building his house. He mowed lawns, started a fund-raiser online and ran errands for anyone who needed help in the neighborhood.

He also had a friend who is an electrician who helped him install the electricity in exchange for Luke cleaning out his garage.

Luke managed to raise about US$ 1,500 for his house

About 75 percent of the material used for the house is made up of recycled material. Most of them were things left over from his grandma’s house. The front door of the house was a gift from a friend of his uncle.

The house roughly measured up to 89-square-foot and is 10 feet long and 5 1/2 feet wide. Though it is installed with wiring and has electricity, It still needed work on plumbing. So, no toilet just yet.

His dad, Greg was also the one that encouraged him on his project. He supported him both financially and with the building itself. But he would made sure that Luke pays and build for most of the project himself.

“It was a chance for a kid to do something more than play video games or sports. It teaches life lessons”

The house, although suitable for one person is in many ways a teenager’s dream. It is a place for someone who just wanted to chill and have some alone time. It has a microwave, a TV and a loft with a bed. There’s even a barbecue place and flowers at the back.

Luke usually does his homework after school inside his own cottage. He also spend the nights during the week there.

“I liked the minimalism. And I wanted to have a house without a huge mortgage”

Luke already had aspirations to build another house. “In a couple of years I want to build a bigger house and stay in it full-time” he said.

He also hoped to inspire others kids to follow their dreams and to put their time to good use.

Luke had created a video of his project. Check it out and share it with others.