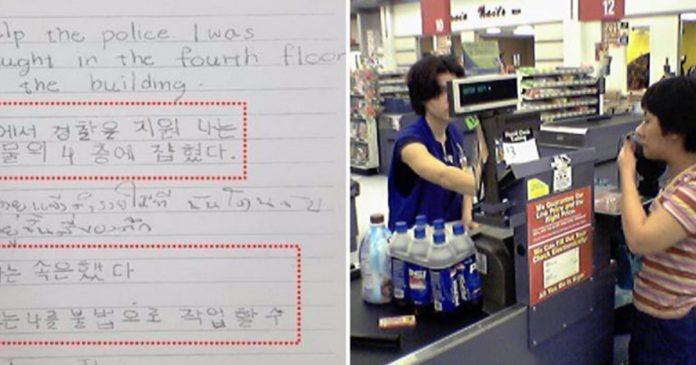 Human trafficking is the trade of human beings and it is condemned as a violation of human rights by international conventions. This despicable activity is thought to be one of the most heinous and fastest-growing activities of trans-national criminal organizations.

Most flight attendants are required to go through specialized training in order to try and identify victims of human trafficking. Sometimes, even unskilled workers such as supermarket cashiers are placed in a position to identify victims who need their help. Their actions have the potential to save countless lives.

In a supermarket in Busan, South Korea, a cashier named Kim was attending to her cash register as per usual when she noticed a young woman enter the store in the company of a few rough-looking men. Something about the way the young woman was behaving made Kim pay especially close attention to her.

Her instincts turned out to be right because the moment the men’s backs were turned, the young woman slipped Kim a note.

The note was written hurriedly but the woman made sure it was legible and she wrote it in English, Thai, and Korean

Seeing the look of desperation on the young woman’s face, Kim took the note and read it inconspicuously behind her counter. The note was written in the English, Korean and Thai languages. The woman decided to cover all bases as this was probably her only chance of escape.

The note was a cry for help as the woman said she had been abducted and was being held captive on the fourth floor of the building. She also mentions that she was “working illegally.”

The cashier then responded by writing carefully on the bottom of the note saying, “Do you want me to call 112 (emergency services)?”

The woman shook her head and it was apparent that there were too many men around with her in the store to call the authorities at that moment. Kim then quickly thought of a way to get the woman’s phone number instead. She said she needed the woman’s phone number to sign up for the store’s point reward system. The men let the young woman give out her number for this purpose and did not think much about it.

After they left the store, Kim called the police. Luckily the authorities were able to track the woman’s phone number. It was traced to a man named Lee who has a history of running brothels and prostitution rings. He runs a business called Kiss Room from where the dealings and activities take place.

The police also gathered evidence from social media platforms, namely Facebook, where a woman said her friend had gone missing. She feared that her friend was kidnapped and forced into prostitution and grievously, her hunch turned out to be true.

With this evidence and allegations, the authorities swarmed the Kiss Room premises and arrested Lee as well as four of his accomplices. They also found five women in the building, including the woman who slipped Kim the note.

All the women were forced into prostitution and they had to earn money for their captors each night. They have been held captive for months. The police are actively continuing the search for human trafficking chains.

Let this serve as a reminder to us all to pay more attention to our surroundings. There is always a possibility that someone may be in need of our help.