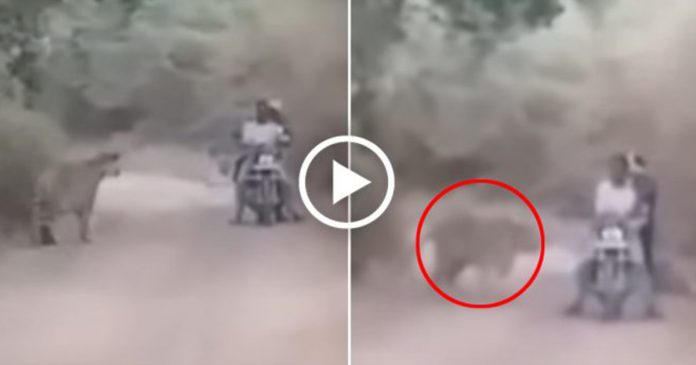 Going to the zoo and seeing the largest cat species in it’s enclosure is extremely exciting. Children stare in awe at the orange cat with vertical stripes and wish they could get a closer look at the majestic tiger. Well, these two motorcyclists came face to face with not one, but two fully-grown tigers while riding through a path which cuts across an Indian jungle.

It was exceptional that these two men on a single motorcycle escaped without being harmed. A four-minute-long blood curdling video was captured depicting the whole incident. The men encountered the two large beasts somewhere in Maharashtra and were seen to have stood completely still, frozen with fear as the tigers neared their vehicle.

Scroll down to watch the harrowing video! 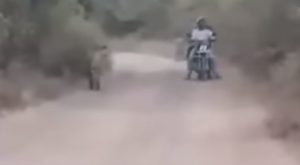 They could have drove past the cats at full throttle but they would have risked agitating the animals and that would have led to an instant attack or chase. Instead they chose to take a risk by standing completely still, not even daring to breathe as they pray for the animals to leave.

All the while, there was a group of people in a car in front of the bikers who had shot the video. They could be heard telling the men over and over again not to move or do anything rash. After what felt like an eternity, the tigers leisurely walk away as they did not seem to be interested in attacking the humans they came across.

The car then rushes over to the men and picks them up as they were told to leave the bike there. They were shuddering from the life threatening encounter they had just experienced. 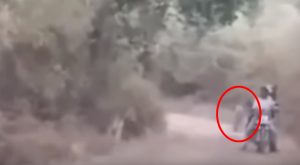 India houses the largest population of tigers in the world but their numbers are dwindling rapidly as poachers hunt them for the high value they have on the black market and there is increasing human encroachment in their habitats. Encounters between tigers and humans are inevitable and there have been many cases such as this before and some were not as lucky to have survived like these bikers.

There has been massive efforts being made by the The National Tiger Conservation Authority to protect these animals and their habitats. In 2014, they found that India was home to 2,226 adult tigers and they estimate this number will increase to approximately 3,000 by the year 2019.