Everyone has something to offer this world, no matter what others may say about us… A former Spanish teacher recounted how she used a $20 bill to teach her middle school students an inspiring lesson about a person’s value and worth. 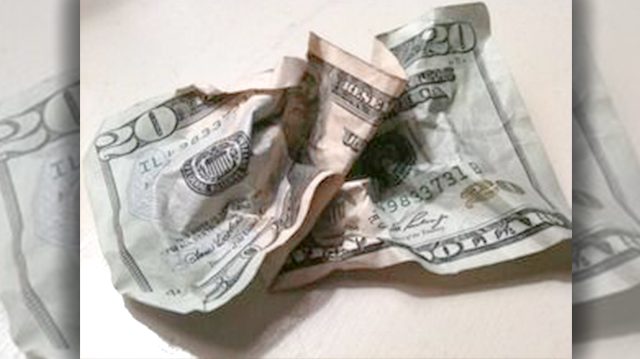 On the first day of school, Spanish teacher Lauren pulled out a $20 bill from her desk. She held it up in the air, asking, “Who would like this $20 bill?”

Not surprisingly, every student raised their hand.

Some of them were even shouting and waving their hands

She proceeded to crumple the $20 bill into a ball and threw it on the ground. “This is a dumb, good for nothing, worthless $20 bill!” she said while stomping on it several times.

She uncrumpled the note and held it up again, “Does anyone still want this $20 bill?” Again, all students raised their hands.

When she asked the students why they still wanted the crumpled and dirty bill, a few replied that no matter how filthy and crumpled it became, it was still a $20 bill

Lauren went on to teach her students the lesson of a lifetime.

“You are so right. A $20 bill is made with a certain value. It is always worth $20, no matter how many times it is stepped on, crumpled up, or thrown on the floor,” she explained. “No matter what anyone says about it or does to it, it is always worth $20 because it was MADE with that value.”

“And the same thing is true about you,” she added

The classroom became quiet as the students listened intently to Lauren’s words of wisdom.

She told the students that many times in our lives, they may have heard their parents, teachers, or friends say things that made them feel worthless.

“There’s a whole world out there that will do and say everything it can to make you feel like you don’t measure up,” she said.

But, she wanted them to know that no matter how they feel as though they’re worthless, they are incredibly valuable.

It’s not about what a person can achieve, but because a person is “made with value”

She wanted her students to know “you have value,” and “you are brave and kind,” and have something to offer this world whenever they walk into the classroom every day.

“Your heart matters, your thoughts matter, your story matters, and YOU matter, and everything we do in this class will be with that in mind,” she stressed.

How true this is! Everyone has something to offer this world, so don’t give up on yourself, stray strong, and believe in yourself. Thanks to Lauren, her students have learned a valuable lesson that’s worth sharing with everybody.

Fast-food restaurant in Manchester places free food outside its door for...