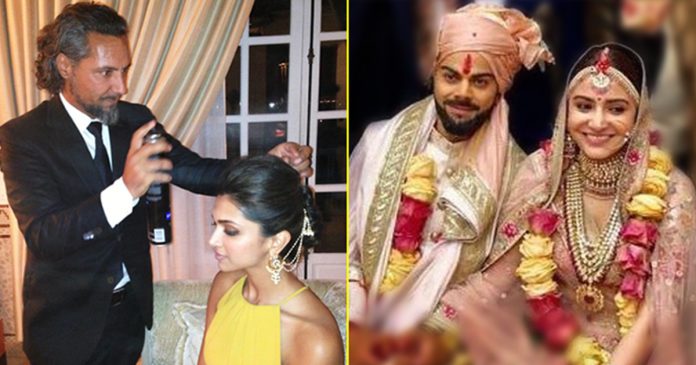 Meet this celebrity hairstylist whose name shines among Hollywood and Bollywood stars like Deepika Padukone, Anushka Sharma, Kareena Kapoor, Priyanka Chopra, Jessica Alba, Robert Downey Jr and more. This “up for an adventure” stylist has made hair his canvas, sprays and blow dryers his magic brushes, and a calm heart his limitless source of energy.

Australian born of Greek origin, Gabriel Georgiou has made a name for himself in the world of glitz and glamour. From being awarded as the “Best Hairstylist” by Vogue India, to conjuring the stunning red carpet looks of stars, and not to mention the gorgeous hairdos that Deepika Padukone flaunts in the legendary film Bajirao Mastani, this passionate artist has embraced it all. The recent feather in his crown is the ethereal hairdo that the newest and loveliest Bollywood bride Anushka Sharma carried at her wedding.

In an exclusive interview with NTD, he shared some amazing moments of his starry journey so far

Georgiou spent most of his childhood in Australia and Greece. As a youngster, he always dreamed of becoming an actor but was turned down by his parents at that time.

“I loved the arts, actually most forms of art and since my parents allowed that I decided to follow in my brother’s footsteps as the idea of creating hairstyles for magazines, music videos and fashion shows seemed attractive,” he says

He then graduated from the Toni & Guy Academy of Hair in London. He also studied period makeup, costume, wigs, and hair at Flagstaff college of TAFE, Melbourne.

From Australia to Athens, London to L.A., he finally set foot in the glamorous Indian city of Mumbai in 2008

He says, “I was invited to come to India by Anima Creative Management who represent creatives and models. India is an up and coming market with so much to offer and with a big fashion and film industry seemed enticing. Actually there didn’t seem to be any session stylists from abroad who were based in India at that time so they wanted to try it out and of course being always up for an adventure I decided to do so.”

The hair styling industry in India surely came in as a surprise to Georgiou.

“I felt that I stepped back in time with the aesthetics and hairstyles that seemed to be stuck in the 80’s and all the upstyles often looked like going to the prom. Everything seemed to look the same and there wasn’t much diversity in looks and style,” he says

He shares that “textured hair was never seen in magazines or on celebrities for instance. The younger actresses wanted to be more experimental and wanted to look more like the Hollywood stars. It has been amazing to be a part of this shift and there has been a big change, from let’s say five years ago, already.”

Over the years, one thing led to the other, he started off with magazine shoots with celebrities, who then started booking him for advertisements, which in turn led to films. He cast his awe-inspiring spell on every Bollywood beauty he worked with.

For someone to be this adventurous and enthusiastic, and not to mention so positive and upbeat all the time there surely must be a “secret” that is playing out behind the scenes. When asked what keeps him grounded after all the success, he said that he owed it to the daily meditation practice of Falun Dafa (also known as Falun Gong).

Georgiou was introduced to the practice in 2002, by a makeup artist in Australia

He says, “I was working on a TV commercial and we started chatting about life and spirituality, where we are at in life and so on, and she told me she practiced Falun Gong and gave me a flyer. I read it and felt a connection. I connected to the fact that it is a practice of both mind and body, that it is based on the universal principles of Truth, Compassion, and Tolerance, and that it is for free.”

“Goodness and knowledge are given from the heart, you don’t pay for that, and I always knew that deep down inside. I also always believed in the proverb, ‘When the student is ready the teacher will appear.’  Everything comes to us for a reason and I felt that I had to give it a try,” he adds.

He says, “I see continuous improvement as a person. I have not only become extremely healthy but also have a lot of energy and feel positive. I am also able to handle difficult situations lightly”

Falun Dafa was introduced in China in 1992 and grew immensely popular due to its health benefits. More than 70-100 million people were doing its peaceful meditative exercises in China alone. But on July 20, 1999, the former leader of the Chinese communist regime, Jiang Zemin, announced an illegal nationwide campaign of persecution against the peaceful practice of Falun Dafa.

When Georgiou, first heard about the ongoing persecution in China he was shocked. He says, “I couldn’t understand how a government would persecute something so beautiful and beneficial to society and something that is rooted in traditional culture. But when I understood the atheist and materialistic nature of communism, and that anything that doesn’t conform to communist ideology is seen as a threat, I understood.”

“I started raising awareness in many ways like parades and peaceful demonstrations, different types of activities and events like the Global Human Rights Torch Relay in Athens, where I was the MC in 2007 a year before the Olympics in China and was also the MC in many cities in Australia,” he adds

As an artist, he reveals that he is working on a personal book project and exhibition that draws inspiration from traditional and ancient Chinese culture. He states “It is a non-profit project intended to raise awareness about the atrocities and crimes against humanity and the persecution of Falun Gong in China. It also showcases the beauty of the practice and inspirational images to the viewer.”

When being asked about the most challenging aspect of the hair styling industry, he says, “It is to not be swallowed up by the superficiality while living in the fashion glamour-bubble of illusion. Staying true to one’s self and not being deluded by the industry”

Gabriel strongly believes “there is so much beauty to life, and one should never forget that.” His positive approach to life is not only like a breath of fresh air but his work on each hair strand reflects the harmony he holds within.

Falun Dafa (also known as Falun Gong) is a self-improvement meditation system based on the universal principles of Truthfulness, Compassion, and Tolerance. It was introduced to the public by Mr. Li Hongzhi in 1992 in China. It is currently practiced by over 100 million people in 114 countries. But this peaceful meditation system is being brutally persecuted in China since 1999. For more info, please visit: falundafa.org and faluninfo.org