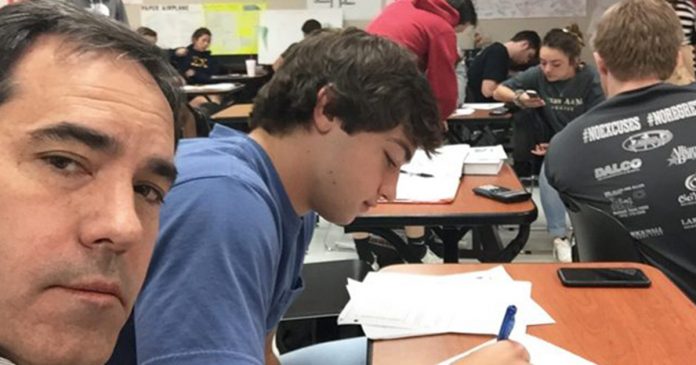 Receiving too many complaints from his 17-year-old son’s physics teacher, a fed-up father decided to dish out a warning to his son, saying he’d take action should he receive one more call of complaint. Although he meant what he said, he hadn’t mentally prepared to follow through … and guess what? The physics teacher called again.

Brad Howard, 53, had received emails from his son’s high school teacher again and again, complaining about the teen’s disruptive behavior in class.

The father told BuzzFeed that his son, also named Brad, “likes to be the life of the party, which gets him in trouble from time to time”

“I like to talk a lot, and so my teacher kept emailing my dad about it,” said junior Brad, who studies in Rockwall-Heath High School in Heath, Texas

For the trouble Brad Jr. kept making, Brad Sr. finally decided to have a talk with his son. At the end of the talk, Dad warned him, “Hey, if we get another call I’m going to show up at school and sit beside you in class.”

The warning was quite effective as he hadn’t received a call from his teacher for a few months.

However, the dreaded call for the teen came one day. The teen’s mom, Denise, told her husband that he had to carry out his promise. She then woke him up early on Friday morning.

“Friday is my only day off, so my wife wakes me up and says, ‘Brad, it’s time for you to go to school.’ I thought, Oh no, what have I done?” Dad asked

Dad called his son’s teacher to ask whether he could sit-in on the class, which he was permitted to do so.

Brad Sr. arrived in class early and sat in his son’s seat. “I was a bit nervous being there among the teenagers,” he said. “Mentally I hadn’t prepared to go into a situation like that.”

While Brad Jr. walked into the classroom, laughing and talking with his friends, he was stunned to hear a familiar voice greeting him.

“I didn’t even notice him until after I had said hi to all of my friends, but I was super shocked,” he recalled

Brad Sr. said his son’s classmates looked like they were enjoying Brad Jr.’s embarrassing lesson. “I think they had a good time. Especially knowing that Bradley was put in an uncomfortable situation,” Dad said.

About 40 minutes later, Dad took a selfie inside the high school classroom and sent it to his wife. Mom then forwarded it to a family group text. She wanted her other children to know the consequences of poor behavior at school.

The teen’s sister, Molli Howard, posted the hilarious photo on Twitter, showing her father’s very serious face next to her brother in the classroom

“My dad told my brother if he got another call from the physics teacher complaining he would go sit in his class … dad got another call,” she wrote, making fun of her brother.

The post soon went viral, and was re-tweeted 2,000 times. Many people praised this dad’s ingenious way of parenting.

And the result? “Super effective,” as Dad said his son took the punishment very seriously. “He’s been doing good in that classroom ever since.”